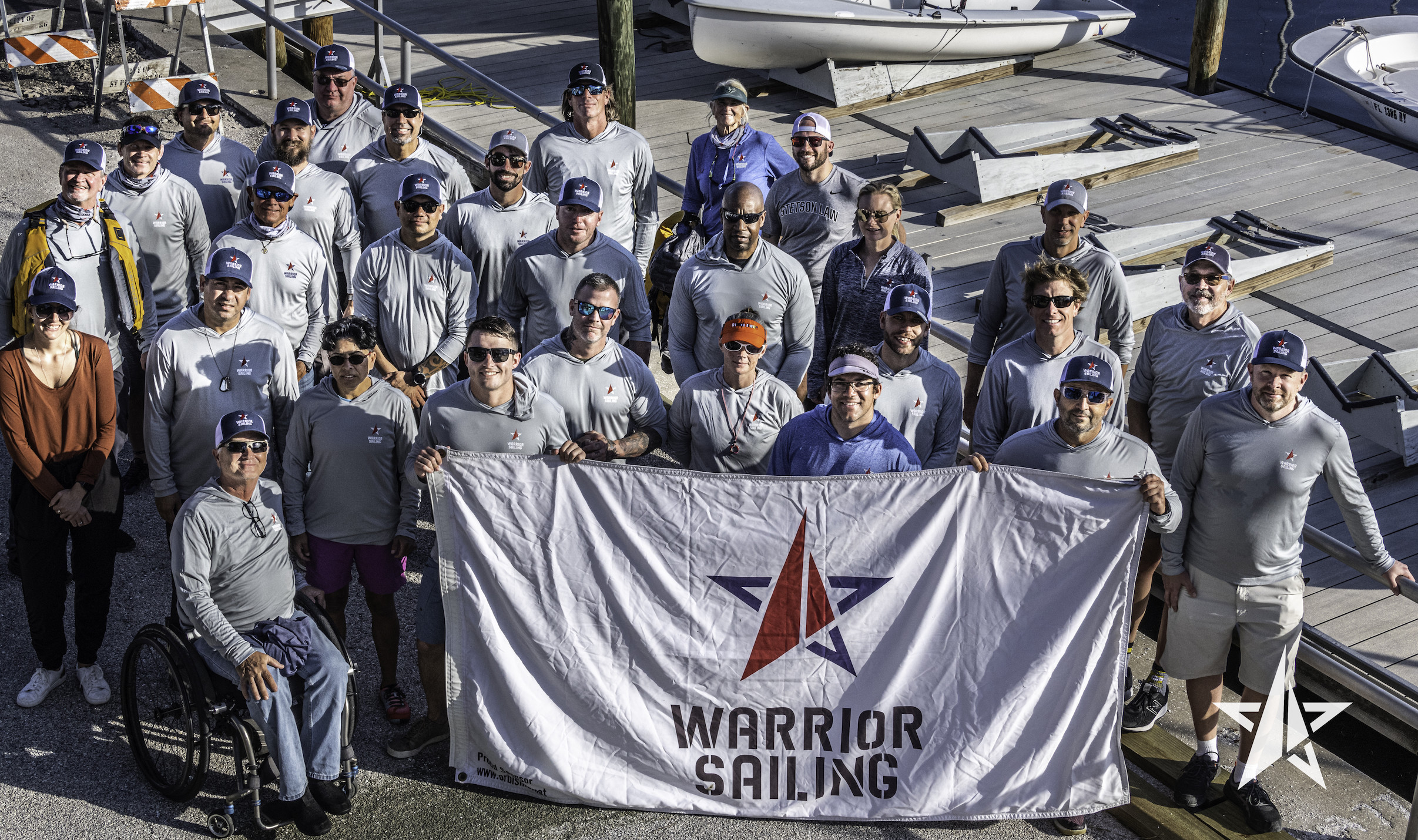 While suicide is highly preventable, asking for help can be extremely difficult for many veterans as personal responsibility and self-sufficiency are pillars of military culture. But, if there’s one thing Ben Poucher, the National Director of Warrior Sailing, wants you to know about why outreach is more crucial than ever when it comes to the veterans warriors he has the honor of serving day in and day out, it’s that they’re worth it.

“I don’t know how any of this happened, but I’m so grateful,” Ben said. “I have 500 new friends that I wouldn’t have had if it was not for Warrior Sailing. This is a dream job, and it’s totally changed my life.”

Warrior Sailing utilizes sailing to bolster their participants’ mental and physical health by reconnecting the veterans to “the camaraderie and teamwork previously found in military service.”

“It’s daunting having to transition from military to civilian life. It’s an entirely different mentality, and that can be intimidating.”

We spoke with Ben to hear more about Warrior Sailing’s mission.

What is Warrior Sailing?

Warrior Sailing was established by accident. A group of sailing instructors, including Ben, were invited to teach at a camp put on by US Sailing. What was supposed to be a day of cruising later morphed into the backbone of their programming.

“We had no intention of becoming ‘Warrior Sailing,’” Ben explained. “We ended up staying at the camp for an extra three days because the group we were instructing wanted to learn how to sail rather than just go for a boat ride. So that’s where our three-day basic level camp model started.”

Warrior Sailing’s “BOLD” campaign, a fundraising initiative, essentially describes the pathway “warriors” take through the program. Through this initiative, Warrior Sailing has pledged to change and impact the lives of 750 veterans over the next five years.

“The most significant difference between other veteran support organizations and us is our level of instructors and the professional instructions given during our multi-day camps,” Ben explained. “Everybody starts at ‘B,’ which is basic training. Even if you have previous sailing experience, you must attend. We’ve found that a lot of people learn how to sail not through instruction but by just being on a boat with friends or by watching YouTube videos and trying to figure it out on their own.”

Warriors must complete a basic training camp before moving on to other degrees of certification to ensure everyone leaves with the same level of understanding and competency. 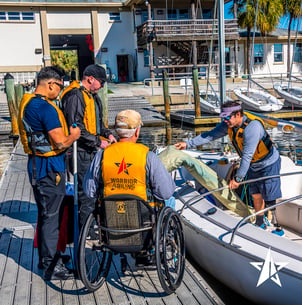 Warrior Sailing hosts five basic training camps per year at different locations nationwide. At those locations, usually a partnering yacht club, they’ll have a fleet of boats and professional coaches with a previous competitive sailing background or expertise. Here, the focus is to introduce the skill of sailing in a fun, safe but intense three-day camp.

“Everyone comes to the camp as strangers, but the camaraderie comes naturally with veterans. They miss the brother- and sister-like relationships they developed in the military,” Ben said. “As adults, it’s hard to find or recreate those relationships, and there are very few spaces as adults where we can make that happen. You can join a volleyball or soccer league, but you won’t get the combined teamwork, adrenaline, and survival skills you get through sailing. You’re depending on the person next to you and working as a team. There are two sails and a driver. If one person decides not to contribute, the boat won’t go forward.”

“Once you’re on the boat, you can’t go anywhere, and you have to work with the people sitting next to you no matter what your background is. That’s what their military service entailed,” Ben explained. “At some point, whether you liked the soldier standing next to you or not, you had to trust them, sometimes with your life.”

One coach per three warriors will teach the basics of sailing and sailboat racing. Warrior Sailing also provides adaptive equipment for veterans with qualifying physical disabilities.

“Only about a third of the people who come to our camps have any sort of physical disability,” Ben explained. “The majority have survived situations that have triggered PTSD, depression, or things that fall on the mental health spectrum.” 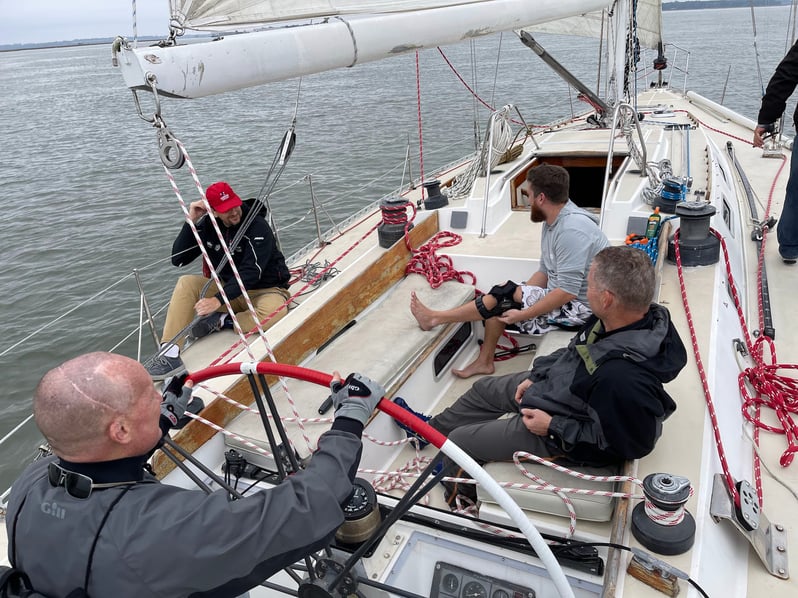 If a “graduate” of the training camp wants to learn more, they come back for an “O” or onboard certification, and then, the warrior can go on to earn their keelboat certification. These camps allow them to hone their sailing skills while laying a pathway for more advanced sailing and racing opportunities. The camp curriculum follows the American Sailing Association Basic Keelboat Certification course curriculum, and participants who can demonstrate the required skills are granted certification upon completion of the camp.

Graduates then move on to “L,” which stands for life-changing experiences. Warrior Sailing encourages participants to get involved with their local sailing communities, and some go on to represent the program at the elite level of the sport. These include sailing regattas such as Charleston Race Week or the Chicago to Mackinac Race.

“I think it’s more about the camaraderie than the competitiveness of the sport,” Ben said. “It’s the laughter coming in off the racecourse or giving these veterans something to look forward to on a Wednesday. For example, after the Chicago-Mackinac Race last year, three of the warriors cornered me and took the same boat we raced on and did a two-week cruise. More memories were made on that trip just by them overseeing their destinies, especially because I wasn’t there to make sure they were okay.”

“D” stands for directorship, which Warrior Sailing is emphasizing now. The organization has found that its warriors want to serve and give back to their fellow veterans. It’s why they enlisted in the first place. But unfortunately, when they leave the military, they lose that element of their lives.

“We’re figuring out ways we can get people through the program to become instructors and become part of our team that helps us progress, the ‘B’ and the ‘O’ of our programming.”

How You Can (and Can’t Help)

“We’ve found that telling people what we don’t need is more important than telling them what we do need,” Ben said. “We don’t need more connections to veteran support organizations. We have a waitlist with at least 150 people on it. We don’t need new locations. The partnerships we’ve established provide localized sailing facilities on a consistent basis. We don’t need boats or people to take veterans sailing. While taking people for boat rides is fantastic, we’re a teaching program whose focus is the well-being and growth of each warrior.”

Warrior Sailing’s online volunteer/partnership form is purposefully complex to educate those wanting to get involved. Ben wants to make sure partners genuinely understand what they’re signing themselves up for. 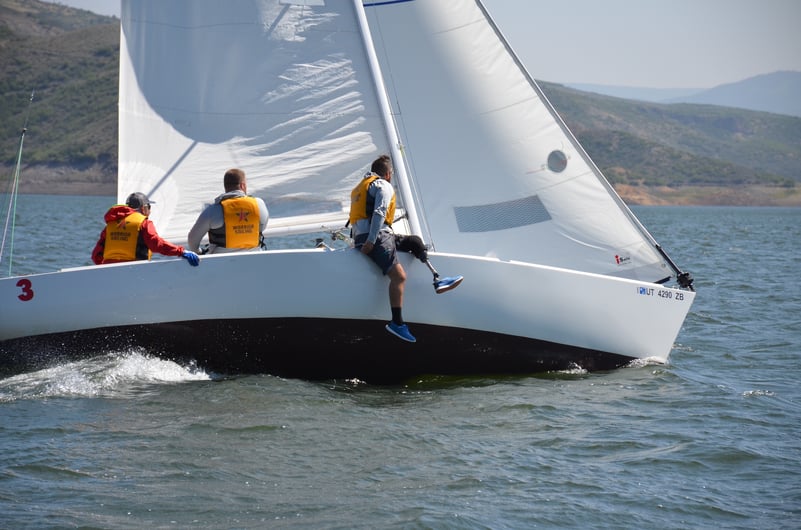 “If a veteran isn’t from your area, are you willing to pay for their travel and hotel for a night of sailing with you? Are their families invited? Can you handle a 4-, 6-, 12-, and 15-year-old? What if a warrior isn’t social? They might not talk the whole time, or in some cases, they might not show up due to their social anxieties.”

It’s a complicated conversation to have, but the best way to contribute to the work and assistance Warrior Sailing provides is through donations.

“What we need are donations to make sure our program remains free,” Ben said. “If you could make a $10 recurring donation per month, that’s one meal for a veteran at our camp. If you don’t have the cash, share our posts on social media and help us spread the word about what we’re doing.”

At every camp, he sees the transformations his veterans undergo, which is why Ben is so protective over his programming. He doesn’t care if they ever go sailing again, so long as every warrior’s experience is a positive and impactful one. It’s how Ben has gained the trust of these warriors who’ve found it challenging to find the same confidence in other programs (or people in general).

“For these warriors, learning how to sail means freedom and revival. So, I want to control the outcomes of what we do as much as I can so that they leave our camps feeling inspired. It’s difficult asking people just for money, but I’m not going to sugarcoat it,” Ben explained. 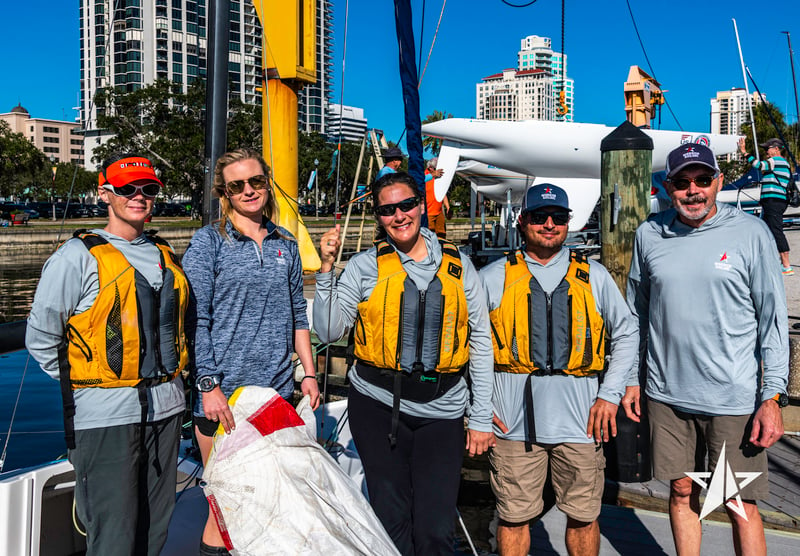 Why They’re Worth It

Veterans and service members are irreplaceable to the fabric of the United States, its constitution, and our national security. How we treat this all-volunteer force during and after their service matters.

“Some of these veterans were not in a good place, and they didn’t know how to say it or know what to do. I didn’t serve in the military, but I can say this is my service,” Ben explained. “The testimonials we receive prove what we’re doing as a team. Their families will write to us and say, ‘This person is different now. Thank you.’ It’s the least we can do, right?” 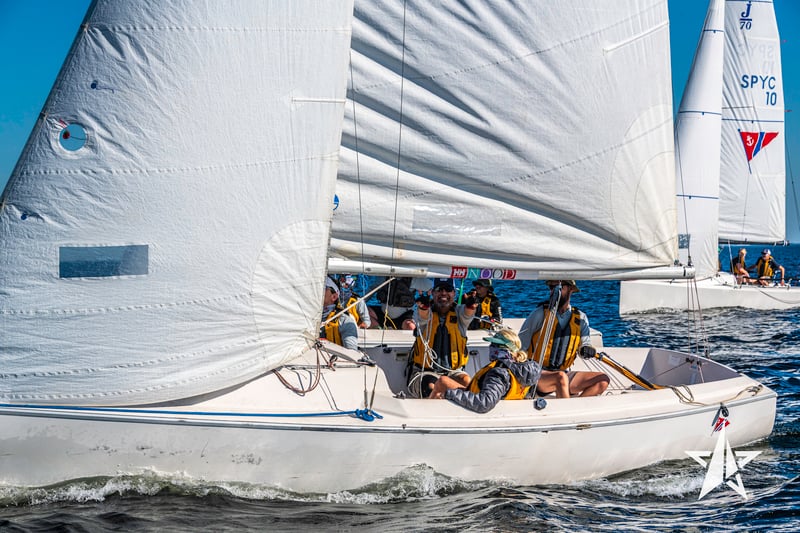 Ben believes if something as simple as sailing can bring people together and aid in the revival and recovery of these warriors, we owe it to them to figure out more ways to provide services like Warrior Sailing and beyond, despite our beliefs and different experiences.

“Our work is about helping a massive group of people that deserve special attention because of their collective traumas, and they’re worth it, every single one of them.” 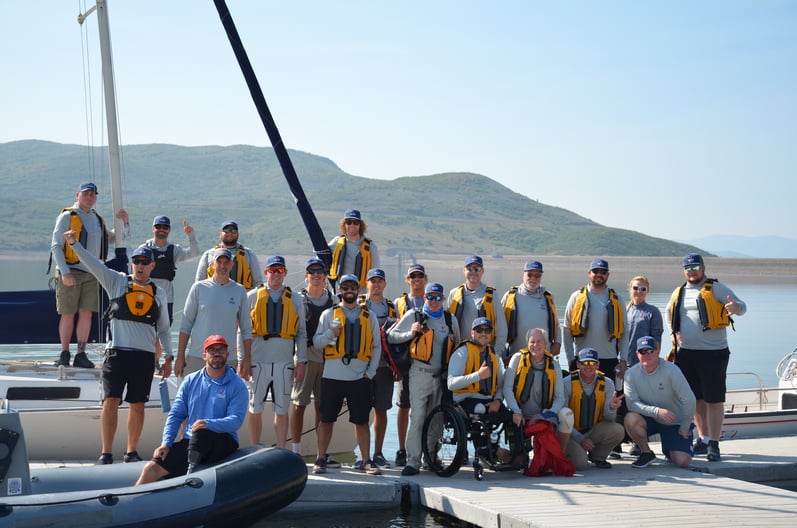 Warrior Sailing is excited to offer a US Sailing sanctioned, Safety at Sea Seminar, which will provide hands-on training certifications for the general public. For the past several years, they've offered these courses internally to Warrior Sailing participants as part of their mission to provide maritime education and outreach for wounded, ill, and injured service members and veterans. They are extending these courses to the broader sailing community to raise awareness, help fund Warrior Sailing initiatives, and of course, provide world-class safety training for cruisers and racers alike. Registration for the March 12th and March 13th dates are now open.

Be sure to check out our other blog posts to get an inside look at our favorite destinations, marinas, and tips for boaters. Join the conversation on Flipboard, Facebook, Twitter, and Instagram. 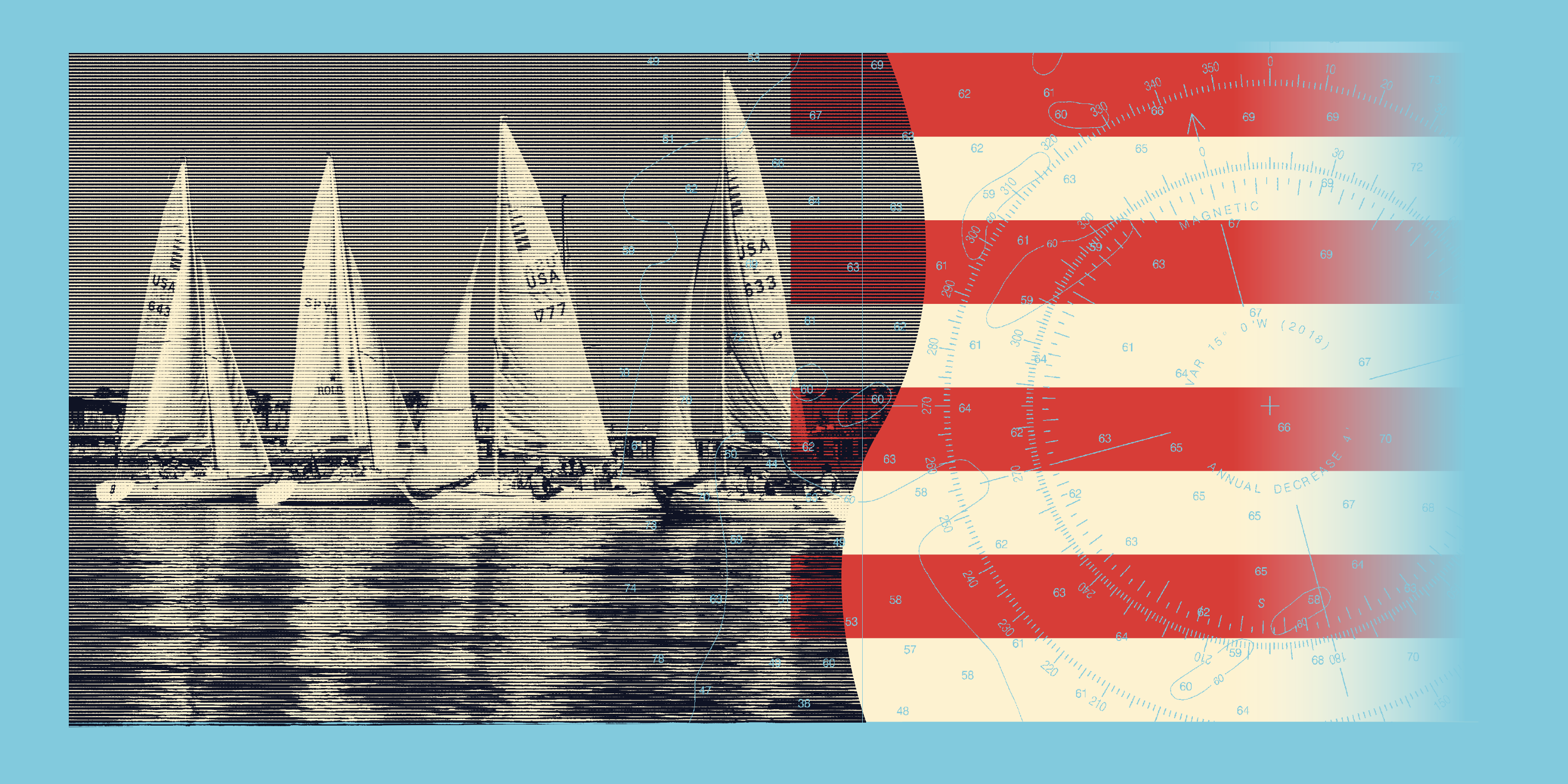 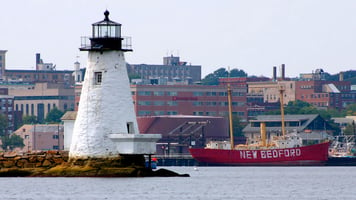 Boating on Buzzards Bay: Things to do in New Bedford, Massachusetts, the "City of Whaling"

We've recently become more acquainted with the city since welcoming Pope's Island Marina to Dockwa. Nestled into a protected harbor with...

Dockwa Makes Wake: Cruising South to Charleston along the ICW

With it blowing 35 knots on the outside, cruising south inside the ICW would save us from taking a beating – however with the Socastee... 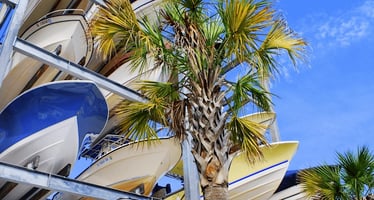 Boat Storage: How to Choose Between Indoor and Outdoor Storage

The truth is, unsurprisingly, it depends. The pros and cons of your options will vary depending on your location, the type of boating you...