Post by Becky at Dockwa - Published on 8/7/20 12:00 PM
Benvenido a Miami, Dockwa boaters! As our East Coast Road Trip makes its way north from the Florida Keys, we stopped in Miami to scope out the scene.

Last Spring we were in town exploring the Magic City, so I visited some of the boating destinations in this lively Floridian haven. Read on for a quick take on some of Miami's best marinas, and learn more about each one on their Marinas.com profiles!

Ed. note: This post was originally published in May 2017 and updated in August of 2020 to highlight our new marina partners in Miami!

To skip down to see the top Miami marinas on Dockwa, click here.

Know a Miami marina that should be on board? If you see something, say something: email becky@dockwa.com with your suggestions. 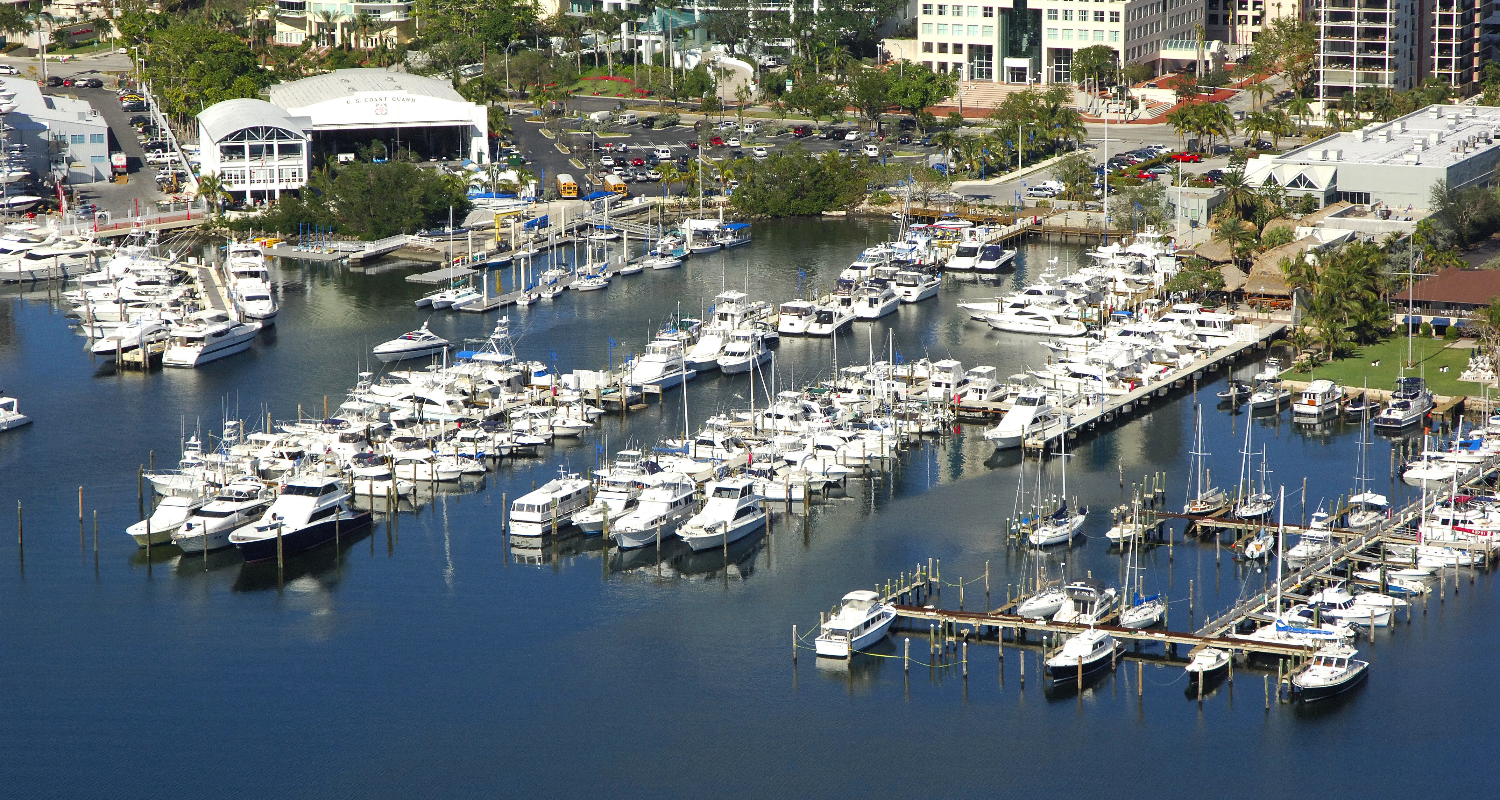 Exciting things are happening at Prime Marina's Miami location. With 114 wet slips able to accommodate vessels up to 100', as well as in-slip electrical and water hook ups, Prime Marina is more than well-equipped as-is – but they're not stopping there.

I met up with Enrique, the Marina Manager, and learned about the existing facility and nearly-completed construction. His team had only just moved into their new offices the previous week, but the new on-site sushi restaurant Sushi Maki and Starbucks were already in full swing. (Pro-tip: Guests tied up at Prime Marina get free delivery from Sushi Maki to their slip!)

If you're into racing and get to catch up with Enrique during your stay, ask him about his experience! He's got plenty of racing under his belt, and coaches a team that will be racing in the 420 Triple Crown this summer.

Just a few blocks down the street from Prime Marina and a familiar sight to any sailor who's raced in Biscayne Bay, Dinner Key Marina in Coconut Grove is another beast of a well-run operation. The staff here manages 480+ slips as well as the 200 moorings just outside the marina.

While already an excellent facility, recent improvements abound and more are on the way. The dinghy dock is less than a year old, and their office building less than two. If you're lucky, you'll get to meet Stephen, who runs the show for the City of Miami's marine facilities, and Edward, the shuttle boat captain. (Pro-tip: For any boat on a mooring, slip 7-18 – that's pier 7, slip 18 – is kept open for you to shower or do laundry. )

Some fun history about Dinner Key: The docks originally served as base of operations for the Clippers, Pan American Airways' flying boats! Read more in their Marinas.com profile.

While in Miami I was lucky enough to meet some excellent tour guides. From stand-up comedy at The Speakeasy in "hipster" Coconut Grove to South Beach for the requisite tourist experience of feeling incredibly under-dressed, there's something for everyone in Miami. Even if you're not the South Beach type, it's worth going on a stroll to take in the vibe, the architecture, and, of course, the beach. When it's 11PM and Boston bars are an hour from closing, Miami is just getting started.

Day or night, locals are quick to point out the steps where Versace died a decade ago, after crawling down Ocean Drive from where he was shot. Grim legend, but legend nonetheless. 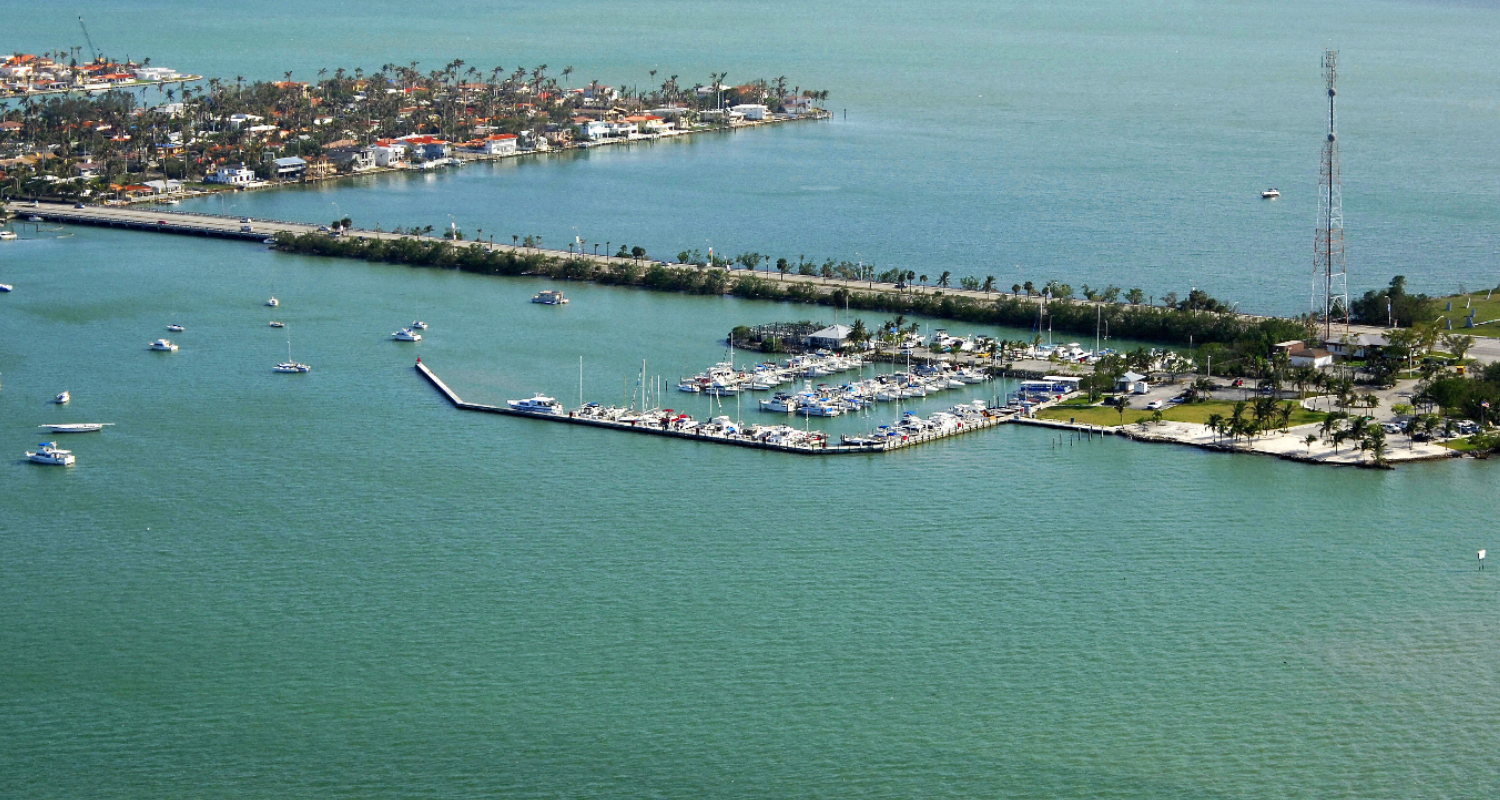 On my way north to Fort Lauderdale, Pelican Harbor Marina caught my eye from the road. Even after hours, friendly faces greeted me – some residents, some boat club members there to take out kayaks. I did a quick dockwalk on the Marinas.com Facebook page, taking in the marina building, beach, and a view of the harbor where Pelican Harbor keeps several moorings. Also on-site and noteworthy is the Pelican Harbor Seabird Station, a wildlife rescue and rehabilitation center that despite its name, accepts all injured wildlife be they mammals, reptiles, or birds, 24 hours a day, 365 days a year.

Thanks to all the boaters and marina teams in Miami for showing me the town! Rickenbacker Marina is a family owned and operated 600+ slip, full-service, dry- and wet-storage marine facility. They boast unprecedented views of Biscayne Bay, Brickell, and Downtown Miami and are known for their exceptional facilities that can accommodate vessels up to 300' in length. In the heart of unrivaled accessibility to world class fishing, cruising, and sailing, there is something for every boater to enjoy.

In the heart of Miami Beach, Fontainebleau Marina draws in pleasure crafts of all sizes and shapes. Tie up for a day or overnight and climb aboard for high-style fun with Fontainebleau’s distinctive restaurants and neon nightlife, or take a break from the berth and relax with friends around the Bowtie pool. From luxury accommodations and lively nightlife to private charters and spa sessions, Fontainebleau is the top marina in Miami Beach.

Every boater knows that from time to time (or sooner) your boat will need some TLC. That's where RMK Merrill-Stevens comes into play. This full-service shipyard is dedicated to the refit and repair of the world’s finest yachts and vessels. They're known for the highest international standards and meets Classification Societies requirements, including ABS, Lloyds, and US Coast Guard Regulations. Their fully protected location refits, repairs, and maintains vessels up to 300 ft. 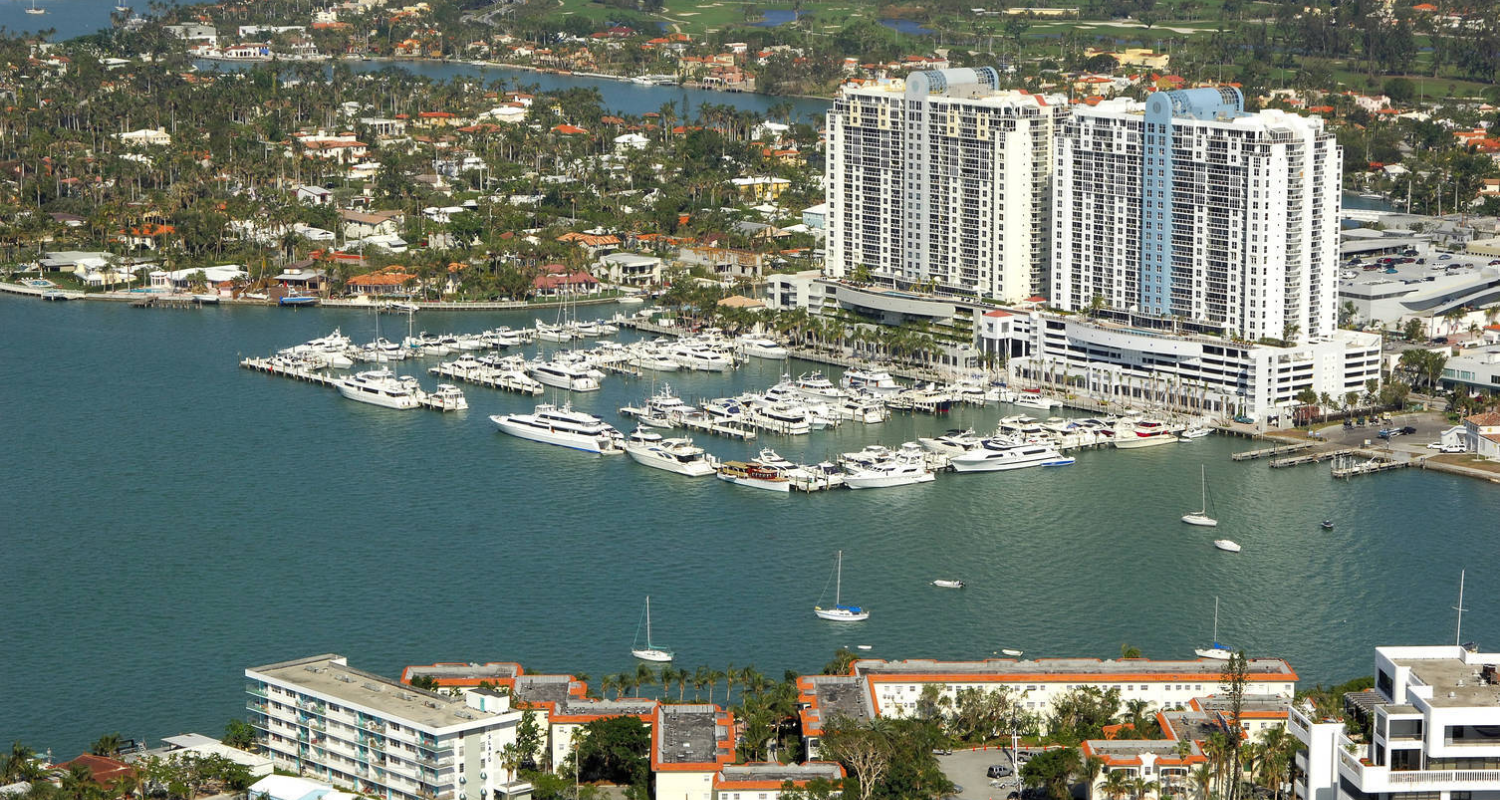 SHYC offers a unique equity club membership program where owners and shareholders share a piece of the prime, waterfront real estate in the heart of South Beach. For boaters that love spending time in Miami, they offer transient reservations monthly, semi-annually, and annually. From gated parking to private fitness center and olympic pool, their amenities are one-of-a-kind. Plus, their within walking distance to all of the major attractions including Lincoln Road, the Miami Beach Convention Center, the Jackie Gleason Theatre, and Ocean Drive! 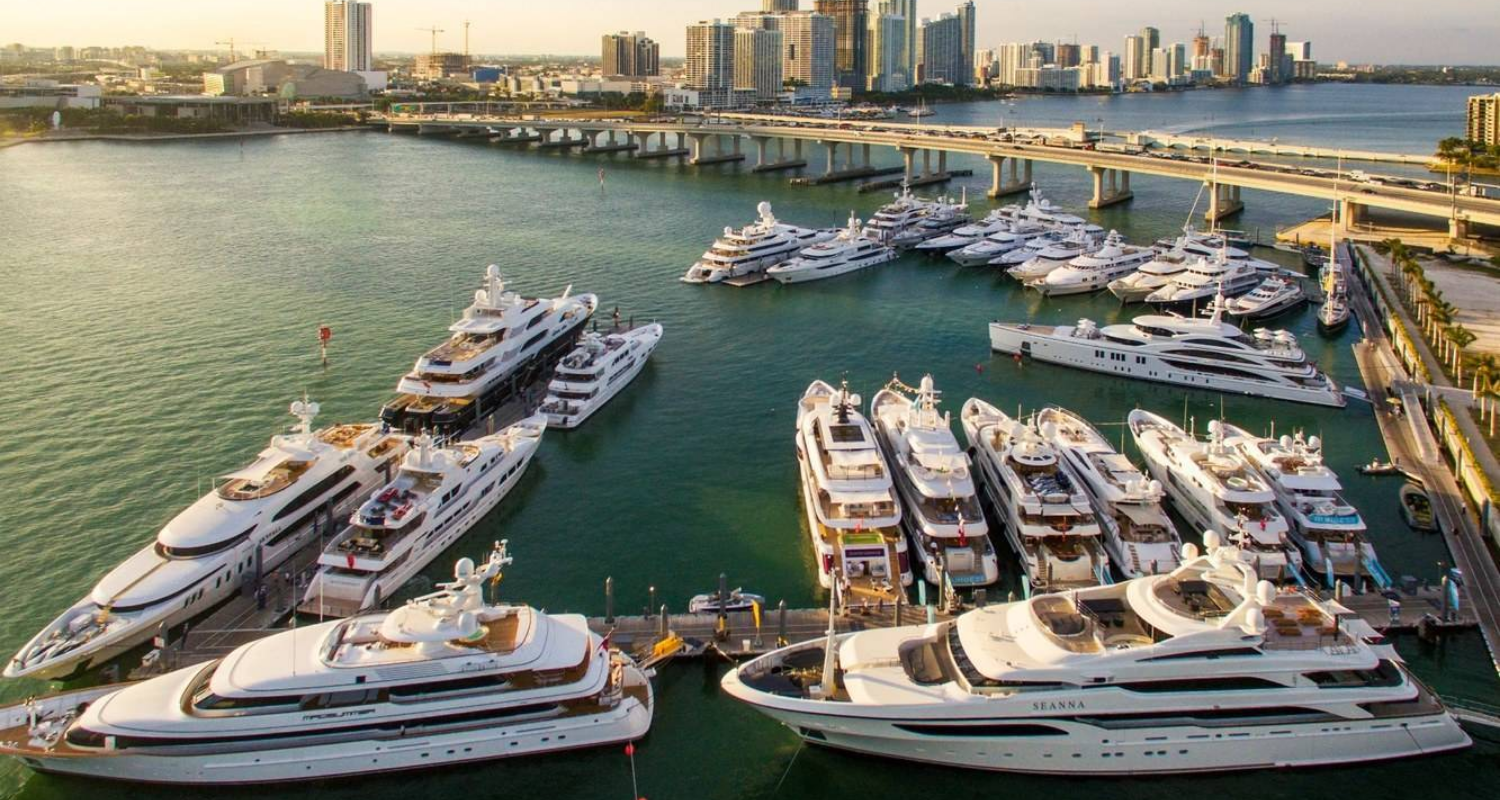 If you're looking for luxury, Island Gardens Marina can more than accommodate. Off the beaten path just north of Miami Beach Marina, Island Gardens' docks offer 360° views of Miami's skyline and constitute 5,000 linear feet of slips able to accommodate mega yachts of more than 500-feet in length, without neglecting the smaller tenders which service such vessels. The lounge and gallery are expertly designed, and the large outdoor patio is the perfect place to host a soiree.

During my visit the marina staff – including the attentive security team – was friendly and professional. For Miami-bound mega yachts, these docks will more than do the trick. 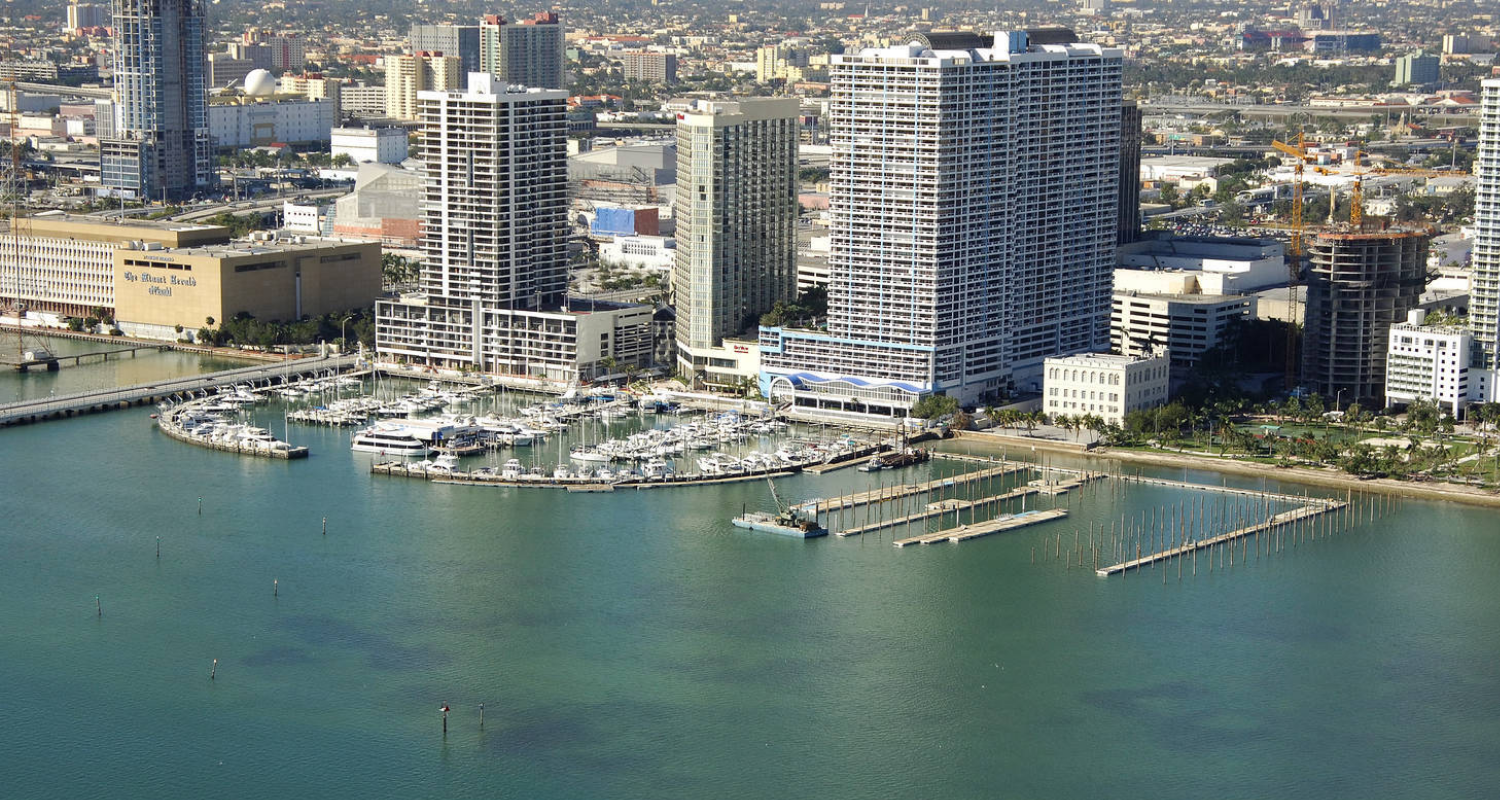 When I swung by Sea Isle Marina & Yachting Center, I was greeted by Guillermo, who happily shared that the team subscribes to the Dockwa blog and newsletter. Guillermo has been with Sea Isle for eight years, and while not an old salt, he still brings a sense of calm to the job even as we helped some boaters struggling to tie up. Sea Isle is located just north of downtown Miami – near the arts, entertainment, and cultural districts – and is a full-service facility, with slips to accommodate vessels up to 110 feet. 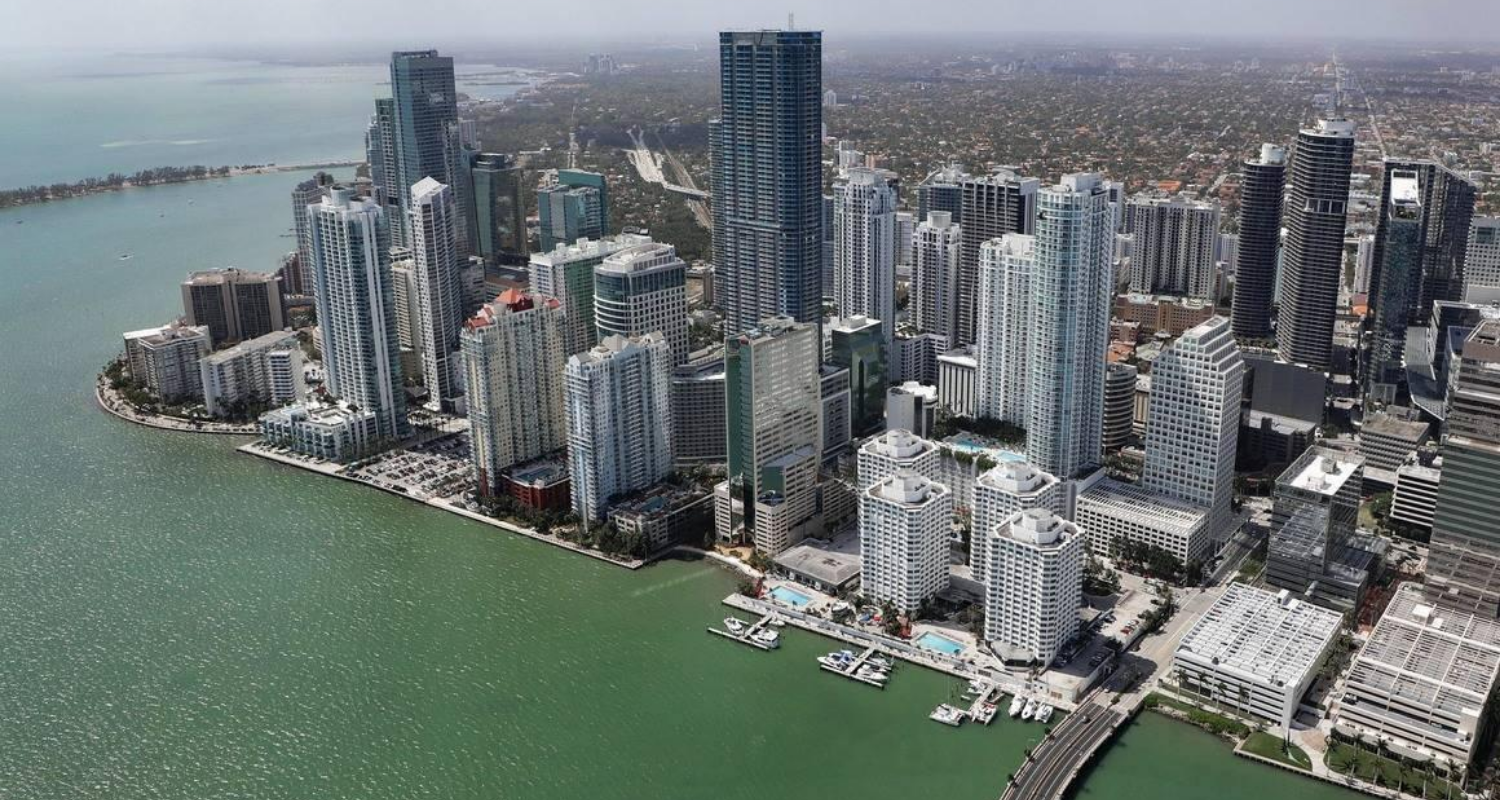 The utmost in convenience, safety, and customer care combine at Vice City Marina, where you can rest easy tied up in the heart of downtown Miami. The crew here is able to provide excellent attention to guests of their 36 slips, with 24-7 security and on-site staff who will happily provide assistance to make your stay a great one.