Figawi: The History of Figawi Race Weekend and a Guide for Attendees

When Memorial Day arrives, you can almost hear the collective sigh of joyous relief from sailors around New England that the season is officially underway. One word sums up MDW for many sailors in the area: Figawi. We wanted a little more backstory on the legend of Figawi, so we went straight to the source and talked to four of the women who were there for the first race in 1972. Read on for a brief history of the Figawi Race Weekend, or jump straight to this year's event guide.

Figawi Race Weekend typically kicks off with a party at Hyannis Yacht Club, a 230-boat pursuit race from the Hyannis Port Jetty to Nantucket Boat Basin, a Saturday night tent party for skippers, crew, and sponsors, Sunday morning's Joke Telling Session, Figawi's Invitational for high school sailing teams, prize giving, and finally Monday's "Redux" Race back to Hyannis. Whew! It's no small feat, and yet, as any Figawi racer will tell you, after 50 years of practice, this event is run like a well-oiled machine.

So, how did Figawi Race Weekend come into existence? As the story is often told: Three friends were having drinks at Baxter's Bar in Hyannis, MA, each one certain that his boat was the fastest of the three. To settle the dispute once and for all, they decided to race from Hyannis to Nantucket.

During the heated competition and completely lost in the fog, one of the sailors shouted, "Where the f**k are we?" which, with a little Cape Cod twang, sounded like " where the figawi!"

Finally, the boats made it safely into port and decided it was a grand idea to run the race year after year on Memorial Day, and thus the tradition that is Figawi Race Weekend was born. But as with most sailing adventures, there's always more to the story.

Seeking the truth, I decided to ask someone who lived it, so I jumped at the chance to lunch at the Hyannis Yacht Club with Connie Horan, Charlene Horan, Jeanne Luby, and her daughter Karen Luby, the wives and daughter of Bob Horan, Joe Horan, and Bob Luby, respectively, the original Figawi three. Like Figawi, lunch was a lively affair right out of the gate, as the group immediately began comparing injuries, swapping stories and updates on friends, and reminiscing.

As we start chatting about Figawi, Charlene, Joe's wife, describes the three sailors and life-long friends as "friends and brothers. Characters and fun from day one. They were spontaneous and hard-working. They weren't doctors or lawyers; they were men, all self-taught sailors that didn't belong to a club or take lessons."

When it came to sailing, they were diligent, taking responsibility and the right measures to ensure the race was fair and safe. Spontaneous as they were, Figawi was a long time in the making.

As the story goes, “a few friends thought a nice, competitive sail to Nantucket would be a fun way to spend the weekend. Therefore, with wives and a few friends aboard, the skippers headed out to see who had the fastest boat in getting to the island.”

But as the Figawi wives describe it, the entire winter leading up to Memorial Day 1972 was one rife with taunt-filled bar challenges at the Old Yarmouth Inn as the guys worked and played hard, getting excited about summer on the water. The night they finally decided to run the race was at Baxter's. So, according to Figawi's first families, the race truly started at the Old Yarmouth Inn, over many, many darts games.

"They were all loudmouths," Connie adds. "But then one day at Baxter's, it was a done deal. It just got dreamed up elsewhere."

All of the tauntings finally culminated the weekend before Memorial Day 1972. The men and their families decided that they'd race to Nantucket the following weekend if the weather were nice.

"If the weather was nice" was a big if. The weather wasn't rainy or hazardous, but it wasn't exactly a picturesque day on the water. The first Figawi was foggy and chilly, but the rain held off, so the race was a go. Charlene sailed while Joe, Connie, Jeanne, and Karen went ahead to welcome the boats to the docks of Nantucket.

"When it was rough, the boat could handle it. But we couldn't go the same speed as some fiberglass boats."

Bob "Red" Luby sailed aboard Red Rooster, a 34' Islander, and Joe Horan with Charlene and Sully aboard Ares.

"Joe [Horan] got off to a fast start and tried to run Red up onto the rocks over near Baxter's Boathouse Club. But Red had the faster boat and sailed a helluva race," Joe Hoffman said

"So here we are, sailing in the fog, in circles," Charlene added. She was above deck when Joe went below to check their coordinates. After some time, he popped his head back up and shouted the phrase that sailed a thousand ships. "Where the figawi!"

"It's not very pretty," Connie says about the race's namesake. "When they decided to make it an official race, the newspapers needed a printable name! So we had to come up with something and had just been told a joke about a lost Indian tribe, and that’s how they spelled it in the joke." And just like that, the race had a name the news could cover. "The spirit of Figawi is the thing. So it's a big deal."

Connie Horan was on the docks with Jeanne Luby and her daughter Karen, then ten years old, waiting for the boats to appear. Karen recalls:

"I was ten, and I remember standing on the dock waiting to see who won. We were freezing! It was so cold we were following the sun around Joe Lopes, the Harbormaster's dock. He came and got my mother, my brother, and myself and took us up into his office where it was warm. And I remember seeing my father come around first! We could see he had the big white flag with the big red rooster on it, and the really shiny mast. We could see them coming!"

"It was shiny," the group confirms. The moment they saw the boats coming is still thrilling to recount decades later. Then begins the discussion of what liquor was likely consumed. Galliano? Rum? Galliano.

"There were no festivities the first year, so we made our own entertainment."

The hearty crew made their way to Cap'n Tobey's for post-race libations, and the idea of Figawi began to take hold. In following years, the weekend included a lay day, with a clam bake on Sunday to feed the hungry crews. With the first outing in 1972 a success, the chatter started building and echoed throughout the following fall and winter. The consensus: Let's keep this going!

Bob Horan and fellow sailor and friend Bob Baker worked out the boat ratings, and the second race was in the works.

Members and guests of the Hyannis Yacht Club can view the Figawi trophy as they walk into the club's doors. The trophy has come a long way since the originals, which were hand-painted with markers on to plates during the race by John Linehan.

"I can still remember him sitting out there on his boat, where all the others were coming in, waiting to paint their names on a pie plate. John couldn't have passed a kindergartener's art class."

While there was always a ruckus to be made after even the first Figawi, the Joke Tent, or Joke Telling Session (JTS) as we know it now, didn't start until 1977. "We got a letter from Attorney Dick Anderson, who had the idea to start the joke session. Pretty soon, we had jokes from people in Marblehead who had doctorates, telling folklore."

Initially hosted downtown by the docks, as the crowd grew bigger and rowdier each year, the town grew to appreciate the language and enthusiasm less and less. Cut to 2018, where you'll see the 15,000 square foot party & joke tent Figawi has hosted for years – off the beaten path and out of earshot of tourists' hearing.

The rules of the JTS are as follows:

Were there always unlimited mimosas and Bloody Marys? Connie laughs, "I always used to say, 'If you're smart, you won't book surgery at the Cape Cod Hospital Monday morning, because the doctors all raced.'"

From the first race of three boats, Figawi is now 230 boats strong and has included America's Cup boats and United States Senators. New faces have joined the ranks, and new boat technology helps sailors navigate the fog in Buzzards Bay, but the sense of family and mischief at Figawi remains.

"After Bob died in 1996, the next Figawi I decided to go over, just to go. I meandered into the tent, where Dennis Sullivan was standing, and announced 'We are going to give a tribute to Red Rooster.' The tent was full of people, and all of a sudden all I could see was all these hats coming off. All the hats! And for what was supposed to be just a couple of minutes, it seemed like an eternity. It was just so quiet. What a feeling."

Also notable the year Bob passed away, the original Red Rooster returned from Maine to compete in the race.

"It came back when he died and got to the island first."

When Joe Horan passed away in 2005, the Figawi race that year was dedicated to him by Dennis Sullivan and Howie Penn. Charlene shares an especially fond memory of Nantucket, meeting her husband there in 1962. She shared that her son got involved in sailboat racing and met his wife at Figawi.

"Nantucket is just special," she said.

As Figawi has grown, so have the hearts of the sailors and community who take part, namely by way of Figawi Charities, Inc. Connie's pleased with how the people who became involved over the years have stayed involved, adding, "If there's one thing my husband would be proudest of, it's the good work that has come from this race."

First and foremost - here are the most important links you'll need for the event this year: 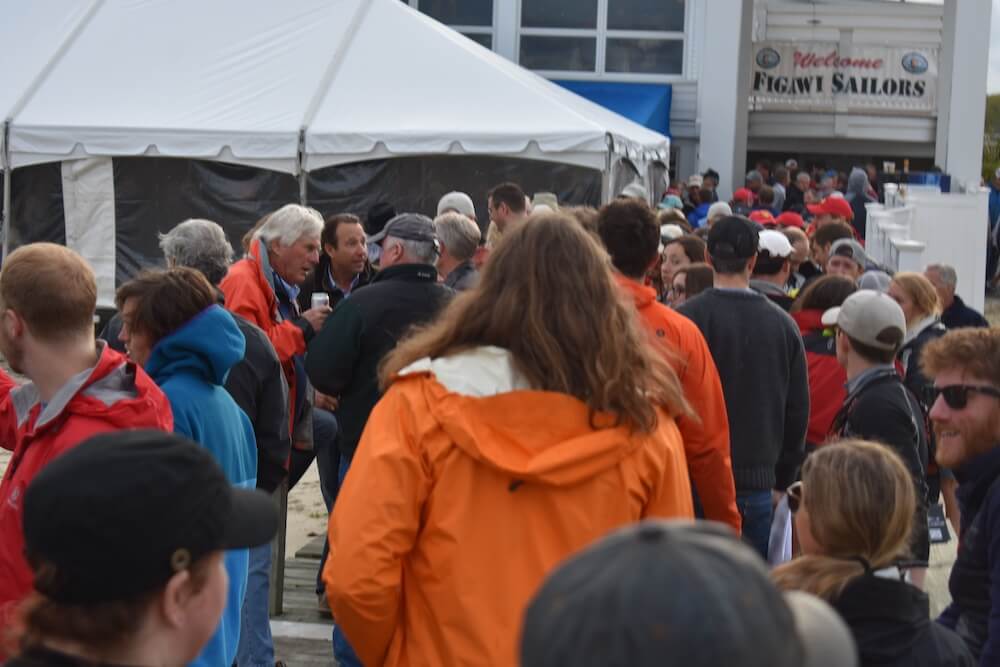 This year's race will happen the following Saturday, May 28th and Sunday May, 29th.

The post-race events and awards will begin 6:00- 10:00 pm after Saturday's race. (Sunday's time and location is still TBD, but we'll check back and update this page when that information becomes available.) 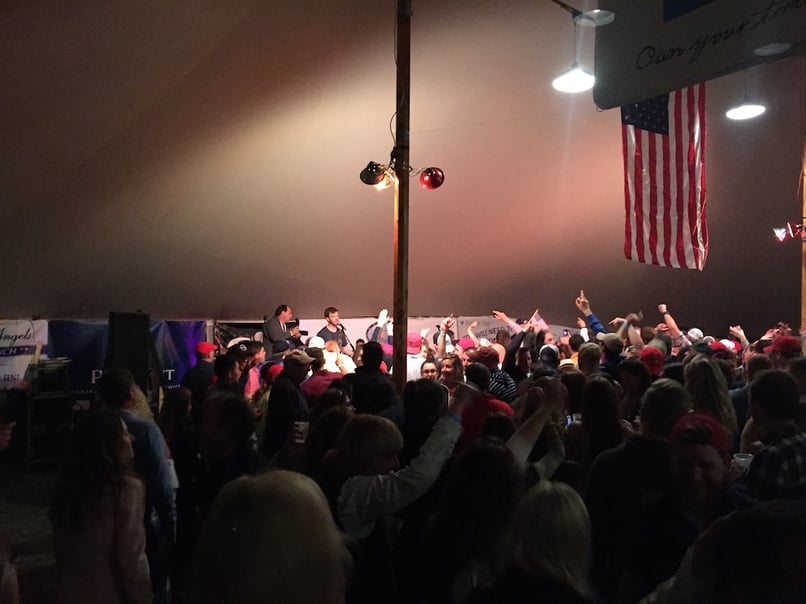 Typically reserved for groggy Figawi-Sunday, this event was canceled in recent years due to COVID precautions, but we'll update this post when the 2022 dates are set.

Will you be racing? Did you reserve in Hyannis via Dockwa? Let us know and you could score some sweet swag.

Stay tuned for more Dockwa updates by subscribing to the Dockwa blog and by following us on Facebook and Instagram.

Thank you to Connie Horan, Charlene Horan, Jeanne Luby and Karen Luby for sharing their Figawi stories with us! Thank you also to the Figawi Archives and Joe Hoffman for photo permissions. Please visit  Figawi Charities, Inc. to get involved and donate. See more photos and stories in Figawi Race: Hyannis to Nantucket (Images of America).

This post was originally published on 5/26/2016 and updated to include links and additional photos.