Post by Becky at Dockwa - Published on 5/7/17 12:30 PM
If you've ever visited a marina that felt simply enchanting – not just because of an idyllic setting, but because everything just seems to come together seamlessly – you can start to envision what it's like to tie up at Stock Island Marina Village.

The largest deep-water marina in the Florida Keys, the Stock Island marina is an award-winning 220-slip marina just five miles from downtown Key West, Florida. What appears to be an effortless integration of state of the art facilities and local flare, Stock Island Marina Village presents boaters with a modern marina that continues to value it's local history and community — a detail that any boater can appreciate.

Ed Note: This post was originally published in May 2017, with a section added in December 2019 to reflect some additions to the property. Stock Island, the Key West neighborhood just north of the main island, is named for, quite literally, being the home of livestock (thus the name "Cow Key Channel"); its beginnings were as a sort of "backyard" to the main island. While located just north on a separate island, Stock Island has a Key West zip code – so local businesses maintain their Key West pride as well as the independent spirit that comes with being set somewhat apart from the mainstream.

Stock Island Marina Village has set the bar high for Florida marinas. Part destination experience, part vibrant community, guests here get a 5-star facility with all the comforts of home and a staff that takes as much pride in their new additions to their on-site hotel, The Perry Hotel Key West, as they do the cozy details such as the community garden.

The facility and team make accommodating all boaters look easy. Transient boaters have access to all of their top-notch amenities, and megayachts are right at home in the deep waters throughout the marina.

Stock Island Marina Village offers 220 slips on brand-new Bellingham concrete floating docks, and the team takes pride in keeping them well-kept. The average depth throughout the marina is 18', perfect vessels of all sizes. The captains lounge overlooks the entire property, and close by are the meticulously kept showers, bathrooms, and laundry facilities. 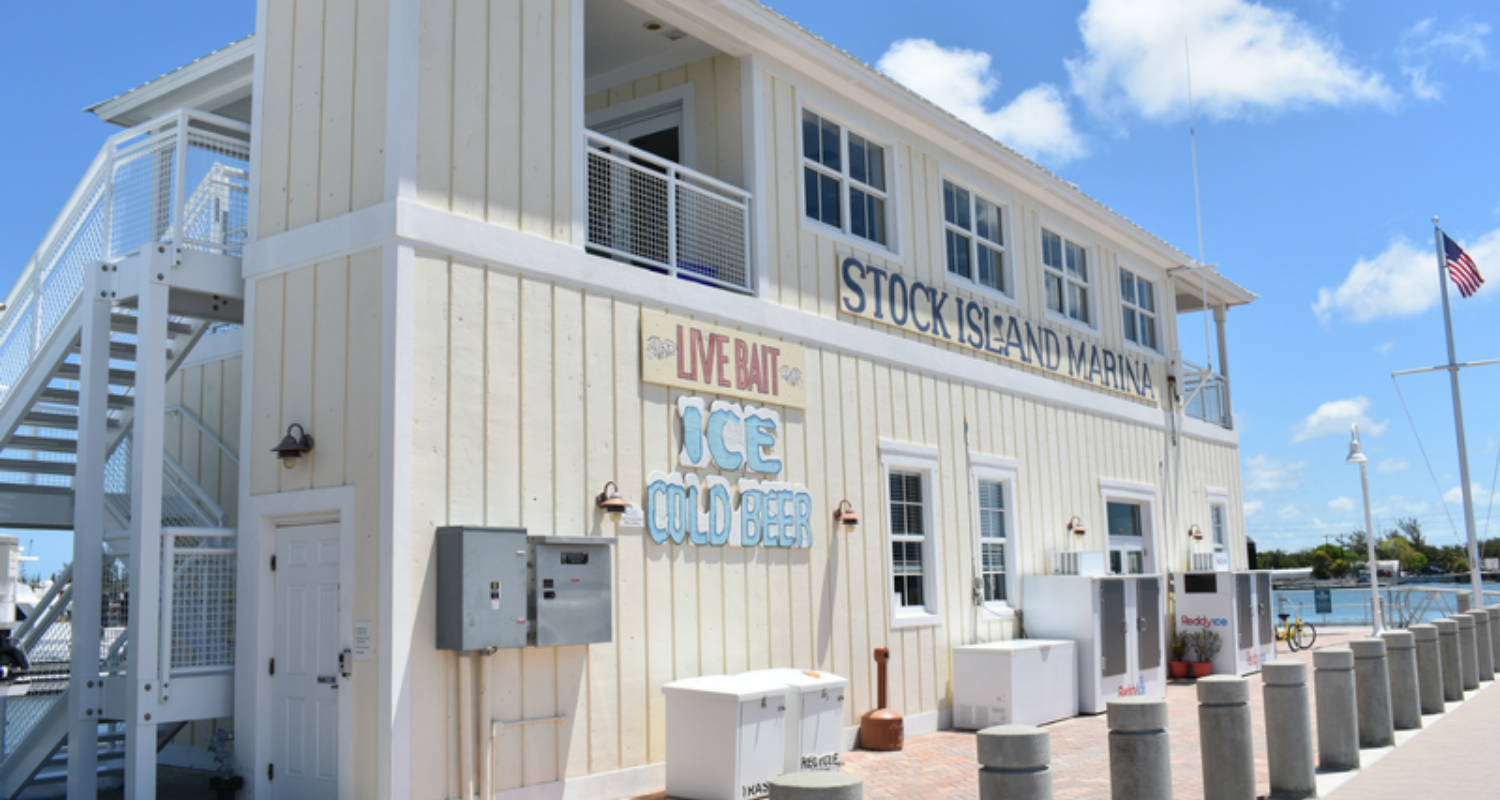 The North Pier comprises mostly of transient dockage, whereas Coconut Row is home to one of the last remaining live aboard communities on Key West. During your stay, take a stroll down Coconut Row and check out these slips that come with an adjoining parking space just feet from the bow or stern of each slip-owners' respective boat, as well as a plot of land to host their grill, deck chairs, tiki huts, bars, and more. Do a dockwalk and see how creative these boaters get with their space!

As many boaters know, staying off the beaten path has its benefits, but flexibility is always appreciated. The marina’s complimentary shuttle runs continuously to and from downtown Key West from 9 AM to 9 PM, providing guests the best of both worlds. You can "Do Duval," then come back and relax. 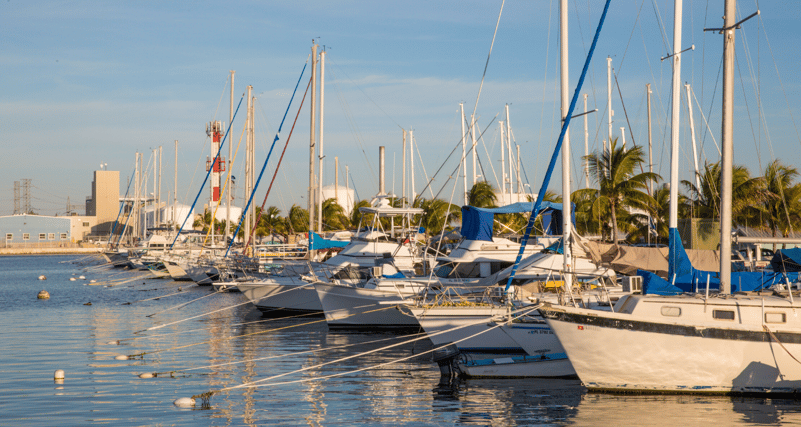 Meanwhile the G-wall is used mostly to accommodate catamaran and mega-yacht dockage due to the lack of restriction beam-wise. On A Dock, Charter Boat Row offers unique private experiences to marina and hotel guests alike including fishing charters, sunset cruises, snorkeling trips, scuba diving, paddle boarding, and more! Hotel guests have a front row view of all the action as Charter Boat Row is visible from the hotel pool, both restaurants, and balcony rooms.

The many uses for their docks reflect the diversity in boating that Stock Island can accommodate, from international mega-yachts to the saltiest of local fishermen.

Meet the Neighbors at Stock Island

Some boats, such as the When and If pictured above (previously owned by General Patton) stay the entire winter. The owner of this particular vessel purchased and completely restored, and offers sunset sails of the Keys.

Namaste Eco Excursions are experts in their field. They feature private day trips ideal for eco-enthusiasts aboard Vessel Reef Geek where they take you snorkeling on the reef among vibrant and beautiful marine life, kayaking through peacefully secluded mangrove trails, and even teach you a thing or two about Florida Keys ecology and sustainability. The owners live on site here on Coconut Row.

Whether guests are searching for fishing, sailing, snorkeling, or diving charters, or even paddle board and kayak rentals, Stock Island Marina Village offers plenty of experiences on property for every type of water lover.

Along with the spotless bathrooms and showers, several wifi hotspots, 24-hour fitness center, two pools, and three on-site dining options, Stock Island Marina Village goes above and beyond with amenities.

Dog owners will find not one but two dog parks, one for small dogs and one for large, just in case your pup prefers his alone time. The entire property is 100% pet-friendly all throughout the village, including the marina, boatels, hotel, and they are even welcomed on the outdoor dining patios at Salty Oyster Bar, Matt's Stock Island, and The Barrel House.

The organic community garden is available to all guests, run by a local volunteer who organizes monthly clean-ups and weeding. Fun fact: Two boaters brought their bee hives all the way from Colorado when they moved to Stock Island, and the native bees just made themselves right at home! The pollination helps everything in the garden bloom and grow. Anyone can contribute, so even when you're underway you're never far from spending a day in the garden.

Nearby Boca Chica Air Station brings the occasional flyover, which has begun a new tradition: the Salty Oyster Bar, the poolside bar, toasts each flyover, with a collection for donations to go to a local charity each time they do.

The local artist community encompasses curations and studios that are directly on property. Make a point to visit the hotel gallery, which is run by a local artist (and also one of the foremost fly-fishermen in the world), which has an opening to feature a new artist each month. (The artist installation replaces a typical hotel store stocked with Alkeseltzer and dental floss.) Talented onsite artists included Leo Gullick, Alan Kennish, and Daniel Siefert. Alan Kennish and Leo Gullick produced the artwork that you'll find in the rooms at The Perry Hotel.

The nods to the Stock Island history and culture are far from marketing gimmicks; the love of their community which is clear when talking with the staff who shared some additional history:

As Key West's tourism industry evolved and grew, the fishing industry moved to Safe Harbor. At 25' deep, Safe Harbor and Stock Island were a perfectly accessible new home for the fishing boats – but the channel and harbor depth aren't due to dredging. The reason it's so deep is because in the 1940s and 50s, they took the soil from Stock Island and moved it to New Town on Key West, which was formerly estuaries and mangrove swamps.

In November of 2019, the marina completed their new development, including a second waterfront pool, a third restaurant, and an event lawn with a stage that's perfect for weddings, festivals, and gatherings of varying sizes. The new dockside restaurant specializes in BBQ (they even smoke their meat on-site) and brews. For those of you who prefer a cocktail to a beer, they also offer 96oz shareable cocktails.

The hotel continues to honor the local history and culture; the wood in the lobby is recycled teak, which blends with the teak, iron, and concrete overall aesthetic, and nods to Hemingway and local maritime industry are found throughout the property. "We're trying to hang on to the fact that we're right smack-dab in the middle of what is very much a working waterfront," adds the General Manager.

Hawk Channel leads to the marinas and is a deep water channel that then leads into Safe Harbor Channel, which has a continuous 18' depth as it leads into the marina itself.

As you approach the marina from Hawk Channel, the first pier you see to port is Coconut Row, the live aboard community. To reach the transient slips, you'll proceed past the 400'+ fuel dock, turn to port, and find a dockhand awaiting your arrival.