One of our favorite boater-bloggers, Dave Horne of MyBuzzardsBay, splashed his boat Vigilant earlier this month and has already been making tracks across New England. We're psyched he's as jazzed for Menemsha Harbor as we are. Get the scoop from a boater who knows the ropes on why Menemsha Harbor is such a game-changer.

Menemsha – on Dockwa May 20th (this is huge) originally appeared on MyBuzzardsBay on May 14, 2019.

I’ve been polishing off the restaurant and marina reviews on spots we visited last season. You’ve seen just about everything I have about Nantucket and you’re about to see some Edgartown reviews as well. The next batch coming will be for The Vigilant Island Tour we took last July to Cuttyhunk and Menemsha. A few weeks ago I was wrapping up The Cuttyhunk Fisherman’s Club post when this flash popped up on Facebook from Becky at Dockwa:

Menemsha Harbor was the next report on my to-do list, but with this exciting news, I dropped everything and moved this to the top of the list.

Becky works tirelessly recruiting marinas to join their incredible marina booking service and her efforts have truly enhanced the pleasure of cruising (see Dockwa the Disrupter).

That said, Dockwa has been so successful that most of the “new marina announcements” these days are “late adopters” in harbors that already have plenty of marinas on Dockwa. But in the case of Menemsha, there is only one marina in town and up until now, it’s been one that was very elusive to book. With this announcement, Dockwa has opened up an entire new island venue on the south coast of New England.

The Menemsha Harbormaster’s old procedure (pre-Dockwa) was archaic. Boaters needed to call the Harbormaster at precisely 7:00 AM on the day you hoped to arrive. If there was space, you could book a slip. If not you were out of luck! Folks, it’s stuff like this that kept me day-boating.

Back in the days of Mean Kitty, I decided I wanted to take a day trip to Menemsha, so I called the Harbormaster and asked about tying up. He said “very unlikely, maybe you could raft up to a fishing boat for a few hours but that would be between you and them.”

Two years ago I met Henry Wainer (owner of Sid Wainer’s gourmet outlet in New Bedford). Henry has a 42′ Hydrasport for fishing, but he told me that he frequently goes to Menemsha and gets take-out from one of the fish markets.

A few weeks later I decided to give it a try. Mrs. Horne and I brought our dear friends Peter and Mary Lee over for lunch. We did tie up, but we were chased off by a dockhand and ended up dropping anchor for a picnic lunch.

Last year we finally made it!

Now with Dockwa, we can plan a trip to Menemsha and KNOW we have a slip.

By the way, Menemsha Harbor has a very mariner-friendly cancellation policy: 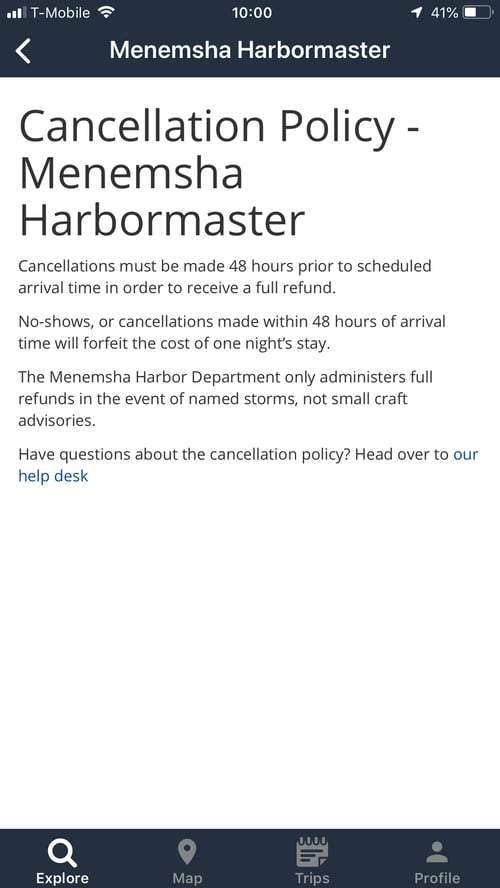 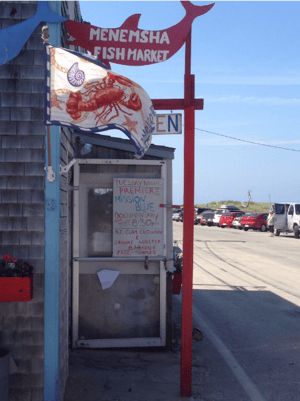 As I mentioned earlier, I reported fully on this wonderful little fishing village in last part my 2018 Vigilant Island Tour post.

Menemsha has limited shops and services, but what’s there is perfect. We had lunch at The Menemsha Deli and dinner at The Homeport restaurant. Both served great food.

You can also order all sorts of takeout from one of the fish market and dine back at your boat or on the docks.

You can’t buy alcohol in Chilmark, but you can BYOB pretty much everywhere.

We carried a little cooler with us to both restaurants and to the beach – which is just a few hundred feet from the marina. As you may know, I love Ballards Beach on Block Island in large part because of the Tiki Bars on the beach.

Chilmark has no ban on open containers so the beach immediately to the west of the marina lends itself to lounging and sipping a “cold one.”

Add it all up and you have a perfect 1-3 day getaway that’s only about an hour from Buzzards Bay without the typical MV summer tourist crowds that’s very reasonably priced (you can’t pay $15 for a martini or $70 for a bottle of Cabernet even if you wanted.)

Yep, Menemsha on Dockwa is huge…

Thanks to Dave for sharing out the big news, and for the intel from his visits there! Click here for the full post on Dave's blog, MyBuzzardsBay.com.