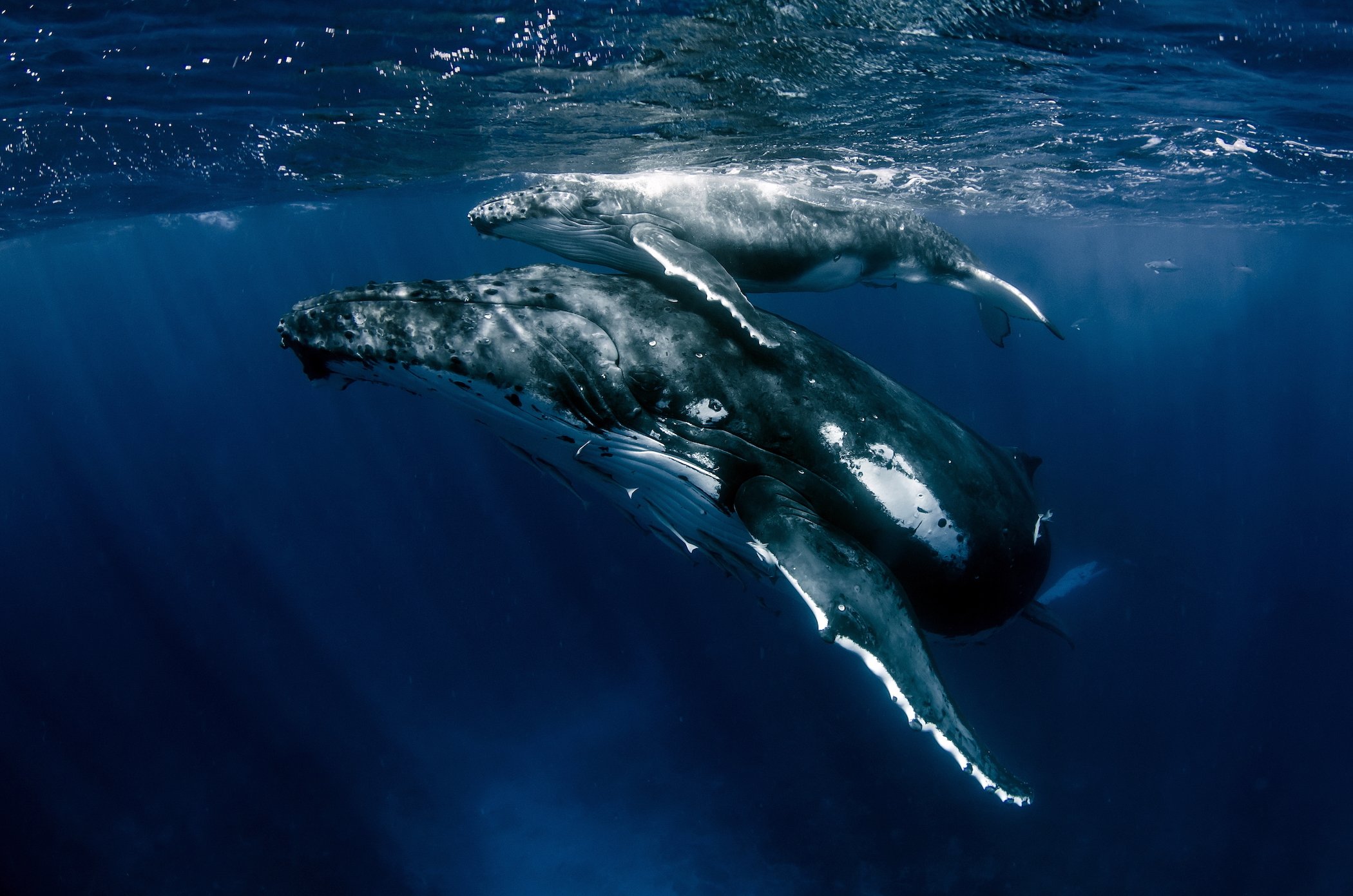 Established in 1971, Ocean Alliance is a 501(c)(3) nonprofit organization founded by Dr. Roger Payne. Dr. Payne has studied the biology of whales since 1967 and is best known for his discovery that humpback whales sing songs. The consequent record Songs of the Humpback whales went multi-platinum and proves to have sparked the global Save the Whale movement. Commercial whalers have targeted whales for centuries because of their meat, bones, blubber, and now supposedly to reduce competition for fish. Whaling is illegal in most countries, but Iceland, Norway, and Japan still partake. Today, Ocean Alliance’s mission is to “protect whales and their ocean environment through research, scientific collaboration, public education, and the arts.”

Whales contribute an enormous amount to our oceans’ lifecycle and overall health, giving marine biologists insights into the health of this blue planet. For example, when whales come to the surface and defecate, those nutrients feed plankton. The plankton, in turn, provides other fish and mammals with food, including the whales themselves. In addition, whales are responsible for absorbing carbon from the atmosphere and bringing it to the bottom of the ocean when they dive or die, and their massive bodies sink to the ocean floor. For this reason, they play a significant role in the fight against climate change, yet we classify six out of 13 great whale species as endangered or vulnerable.

“All the information we collect about whales through our research aids our decisions on how best to protect them,” said Alicia Pensarosa, the Assistant Director of Ocean Alliance. “One of the ways Ocean Alliance is continuing the study of whales for their conservation is through non-invasive techniques and technologies.”

This brings us back to the whale snot. In Alicia’s own words, she further illustrated why the health and conservation of whales should be on everyone’s radar. 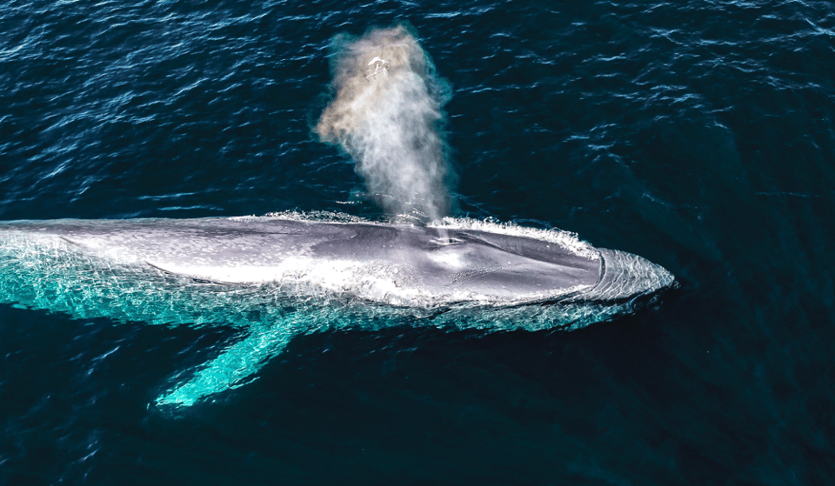 What is Ocean Alliance's "The SnotBot"

Developed by Ocean Alliance’s CEO, Dr. Ian Kerr, in collaboration with Olin College of Engineering, The SnotBot is a more efficient way of collecting biological samples from whales without disturbing them. In the past, Ocean Alliance biopsied animals, which some researchers still do, but it is intrusive for the whales and difficult for the researchers.

So instead, Dr. Kerr flew drones as a hobby and combined that with studying marine animals. The SnotBot flies over whales and, as they exhale, collects what Ocean Alliance likes to call “snot,” or the whale’s blow. Then, Ocean Alliance analyzes these blow samples to understand the health of whales.

Ocean Alliances drones also have a suite of different sensors or cameras, allowing them to collect various supporting data. For example, along with collecting whales’ exhalation, they also use a photogrammetry kit to measure the size of the animals, which helps them understand the whales’ body condition and health. Ocean Alliance also uses thermal cameras to study other body metrics. In addition, they’re now exploring fixed-winged drones to count whales for population surveys without them even knowing.

Consider that the saliva on glass can help us identify a person’s DNA. It’s essentially the same thing that Ocean Alliance is doing with whales. When they analyze the samples we collect, Ocean Alliance can see the DNA of a whale population. As a result, biologists can determine healthy populations because of their genetic diversity versus populations with limited diversity. Genetic variety is significant in places where there’s not much known about a specific population of whales.

Ocean Alliance also uses whale exhalation to study hormones. For example, they can determine male or female hormones when a whale is pregnant or lactating. They haven’t gotten there yet, but Ocean Alliance is trying to quantify stress hormones by seeing how much cortisol is in a whale’s exhalation. This research will be necessary for future studies about what human activities and behaviors are stressing whales.

Ocean Alliance scientists also analyze microbiomes. For example, a healthy lung microbiome helps us understand what natural bacteria and parasites may occur in a whale. When they look at a population’s health, they’re able to catch red flags as they appear. 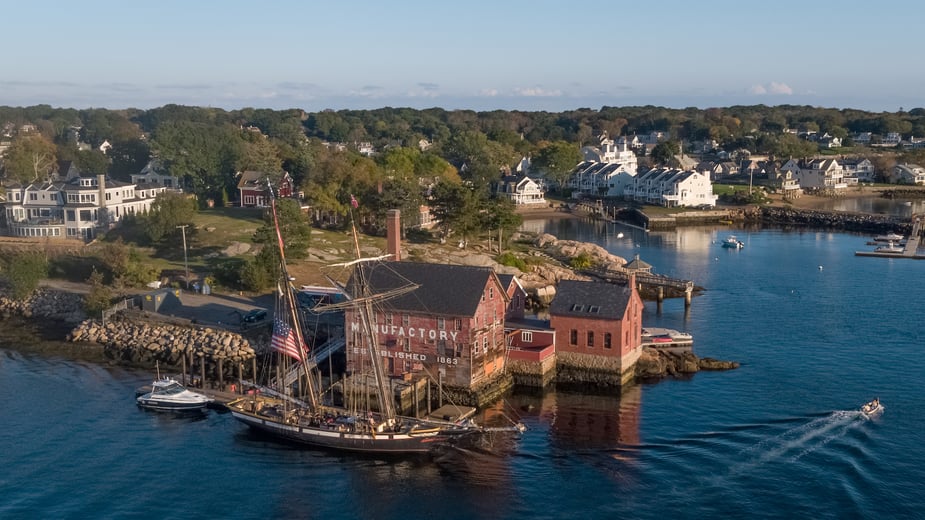 How Ocean Alliance has used Dockwa to advance their mission

Ocean Alliance is developing an Ocean Innovation Center. So, they are restoring some of the older buildings on-site to give them and the ocean research community the space they need to conduct more marine research focused on ocean solutions. To support this, they added 132 feet of brand-new linear industrial dockage (16-inch steel pilings and 12-foot-wide docks) at their headquarters in Gloucester, Massachusetts.

They use Dockwa to rent slips to transient visitors, which helps Ocean Alliance pay for their research and expand their facility. They have had all kinds of boaters and clients come in to not only rent a slip but visit the facility to learn about their research programs and restoration efforts.

In the 1800s, this facility was a factory that first developed and produced antifouling paints. The materials they used included copper, chromium, and mercury, which in turn stopped biological growth. The site was abandoned for 30 years and therefore highly contaminated when Ocean Alliance took it over. There were many clean-ups they had to do to decontaminate and restore much of the buildings, and there is still one building to go.

The factory built two of the buildings on pilings on the water, which is where they stored thousands of gallons of bottom paint before selling it around the globe. Unfortunately, they took down those two buildings in 2011 because they were falling into the harbor. But, since they formally sat over the water, they wanted to develop a way to put them back and keep the historic look of the buildings. So, Ocean Alliance plans to put them back on floating barges and spuds to rise with the changing sea levels or high wind events. In addition, it helps them prove there are additional ways to combat climate change and the flooding we’re all experiencing. 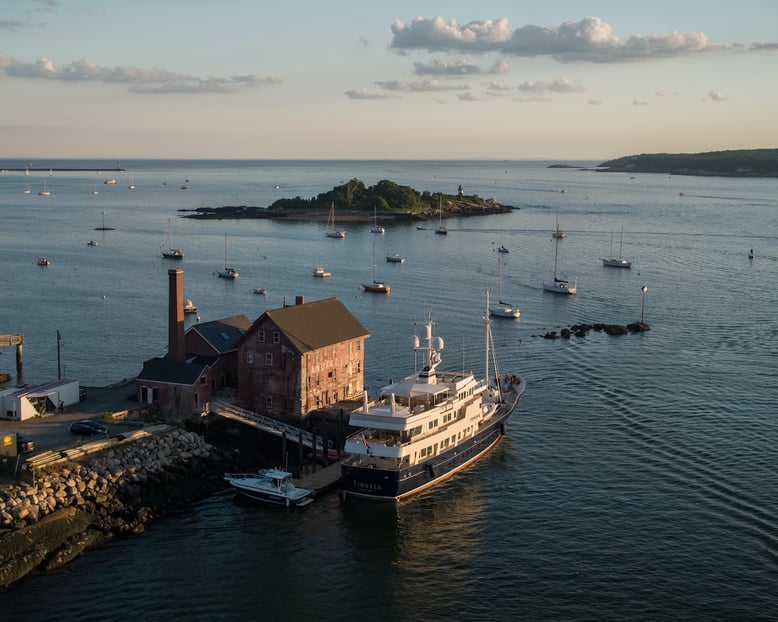 There are a lot of populations of whales around the world that are still endangered or vulnerable. Ocean Alliance is working hard to make sure that they recover. Their motto is Healthy whales, Healthy Oceans, Healthy Humans. It is in our self-interest to have healthy oceans. Human efforts have seen the population of Humpback whales in Gloucester and the Southern Right whales we study in Patagonia on the road to recovery. Still, there are many other whales exposed to human threats every day.

Alicia says, “It’s crucial to make your voice heard whenever there’s an important topic in the news or something your Congressperson may be voting on involving whales or the ocean. You don’t have to be a marine biologist to make an impact. There are still other small things you can do, like being mindful about your plastic consumption. You can donate to our organization via whale.org or visit us on your boat! Your dock fees will go towards our research. Anyone can make a difference by making small life changes. It all adds up.” 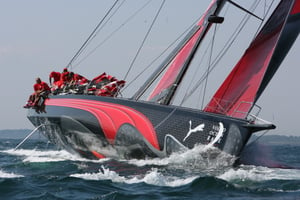 This is the 12th edition of the race, and it has evolved from the Whitbread Round the World race into the Volvo Ocean Race we know today.... 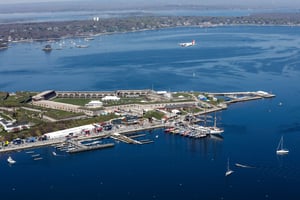 Docking in Newport, RI for the Volvo Ocean Race

With the Volvo Ocean Race boats sitting pretty at Fort Adams, sailors and sailing enthusiasts from all over are flocking to Newport. What... 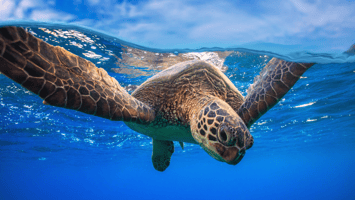 Below you’ll find our Q&A with the Ocean Conservancy team, who, in their own words, gave us an insider look at their humanitarian efforts...