Connecticut Waters through a Photographer's Lens

Who better to learn about a cruising destination than someone whose line of work granted her decades of front-row access to document the region? Now, with a stunning new book paying tribute to Connecticut's waterways, activities, and maritime roots, photographer Caryn B. Davis shares with us some of her favorite sights of the shore she calls home.

Award-winning photographer and journalist Caryn B. Davis has traveled the globe, and her images and articles have been featured in more than 60 publications worldwide including the New York Times, Town & Country, and Conde Nast Traveler.

Before life as a photographer, Caryn had a long career in television as a documentary writer, producer, camera operator, and editor. She’d long wanted to pursue her passion for photography as a career, so when work sent her overseas, she seized the opportunity to build a photography portfolio, documenting her travels on the weekends. In 2000, she made the career switch, beginning with photography focused on architecture, boating, and travel.

Having traveled the world, and now able to live anywhere to pursue this talent, Connecticut's beautiful ocean front scenery called her back to the Northeast. She joined the ranks of Offshore Magazine, working with them as the sole Connecticut photographer for 15 years.

“Caryn B. Davis has absolutely captured the essence and soul of Connecticut in her new book Connecticut Waters. Caryn, through stunning photography and inviting narrative, tells the story of the best place on earth. She has inspired me to see the places I have missed and has made me fall more in love with the ones I know. This is my favorite book about Connecticut ever.”

The images within truly capture the many facets of Connecticut's storied and active coastline, from the traditional and historic to the playful and peaceful. She shared with us some of her favorite harbors, events, and historical landmarks boaters should explore as they visit her home "surf." 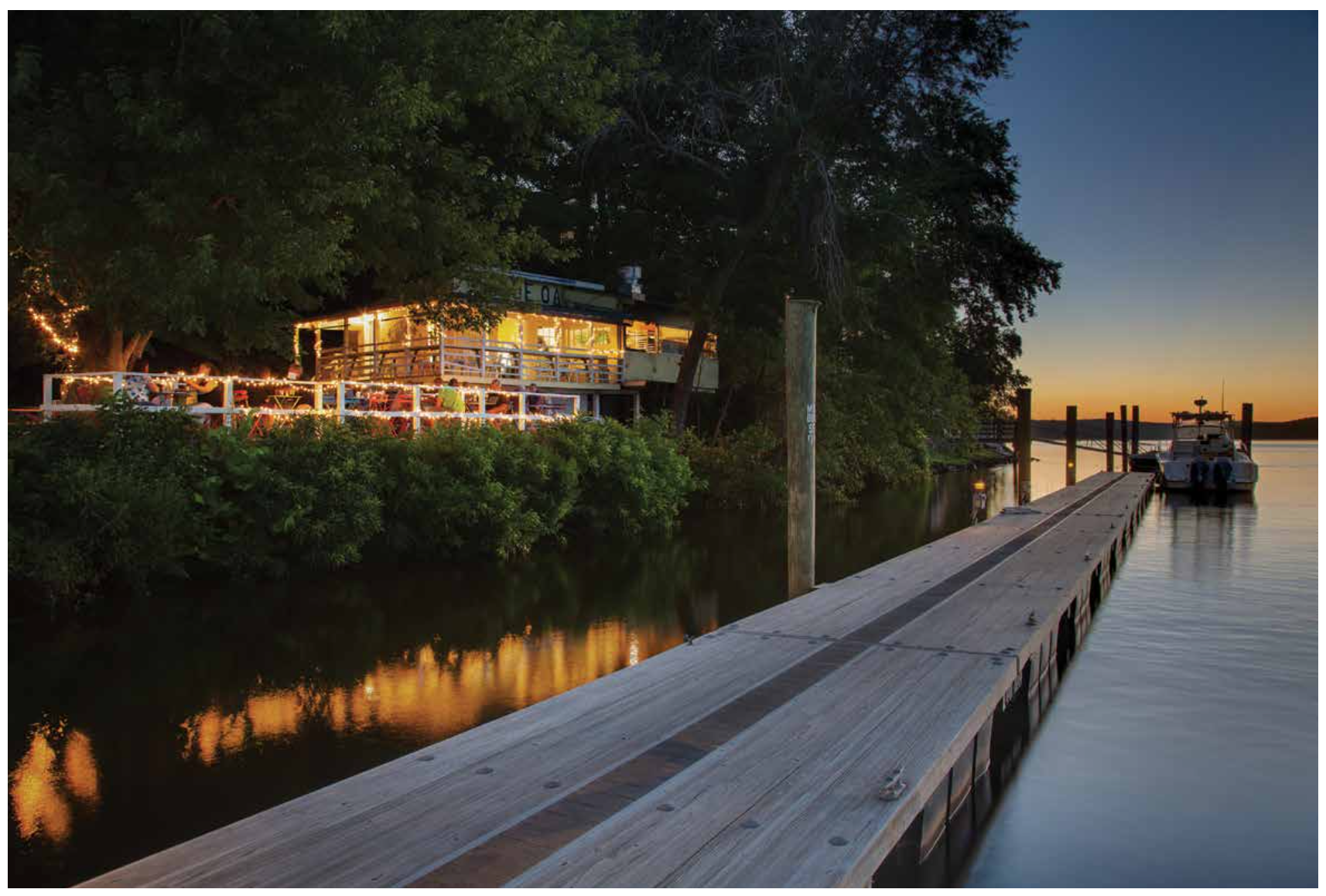 Most boaters want to share their love of the water with friends and family, so as you cruise the coast, you'll likely want to take your own photos of the sites Caryn recommends below. That's where knowing how to take a great on-the-water shot can go a long way. So we couldn't help but ask this seasoned pro: What are three quick photography tips does she have for Dockwa boaters?

"Sunrise and sunset are really the best time to take pictures – when you're producing a book, you don't always have the luxury of getting the boat at that hour, so composition is everything. Everyone can get lucky with that one shot, but to do it consistently takes practice – so taking shots during sunrise and sunset will give amateur photographers an edge in getting a great shot."

What are the drawbacks of every boater having a smartphone camera in their pocket at all times?

"The iPhone is a great tool because it can read the highlights and the shadows better than a camera! The drawback there is that you can't really blow up that big with it, so you have less control."

"My one pet peeve – especially with photos of architecture or a horizon – is when the perspective is not correct, or when it's not straightened."

So boaters: keep those horizons squared, set a reminder for the golden hour, and keep practicing to hone your composition skills. 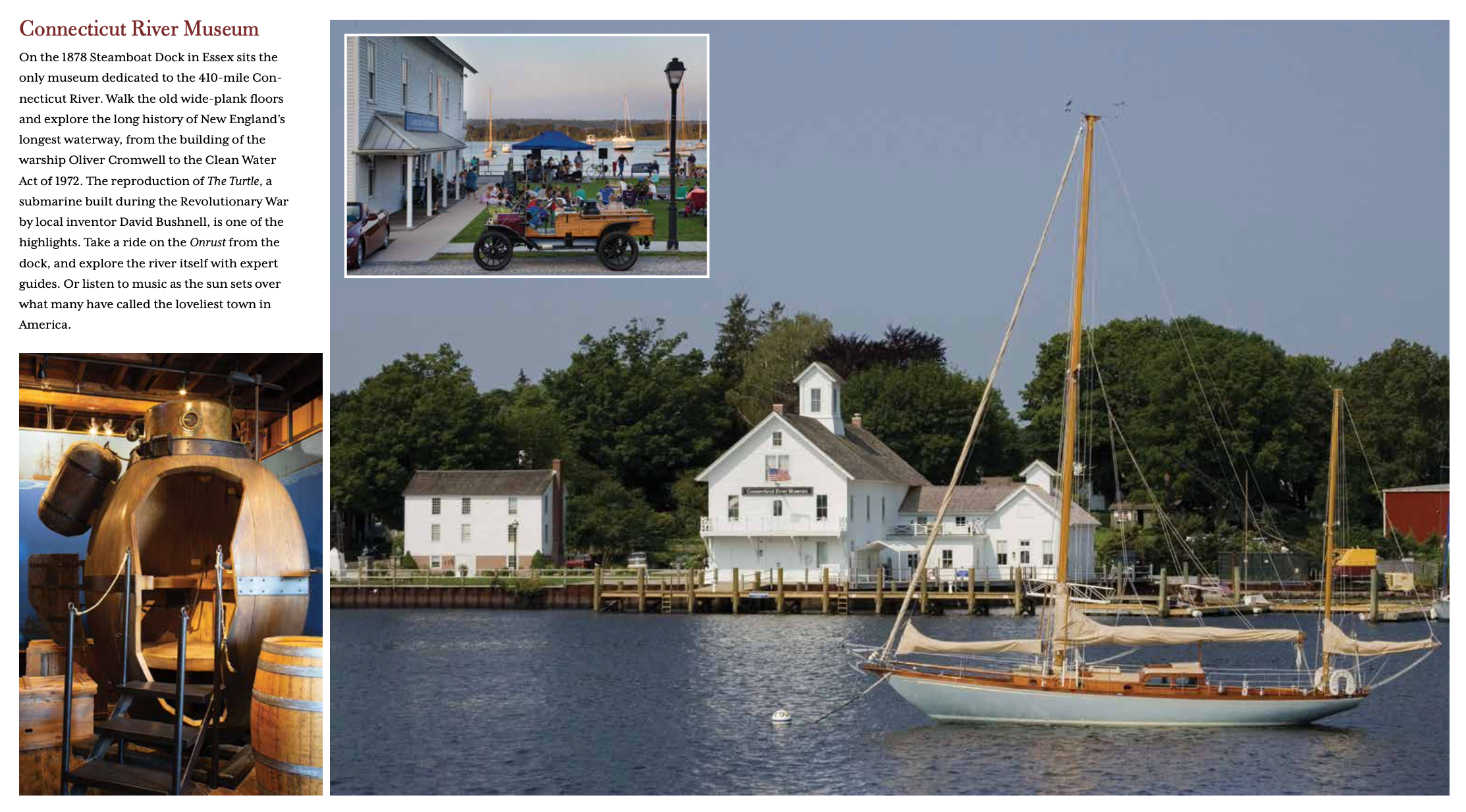 The Connecticut River Museum, the only museum on the entire 410 miles of the river dedicated solely to its history, always has great events going on – the annual Shad Bake benefitting the Essex Rotary, for example, and the annual Burning of the Ships, held on the second Saturday in May, during which the Sailing Masters of 1812 mark the British raid on Essex ships and shipyard on April 8, 1814, during the War of 1812. The museum also often has music on Thursday nights, fantastic exhibits, and events throughout the year.

On the other hand, sometimes when you're looking for on-the-water entertainment, you can just sit back and let nature do the programming.

In September, the swallows come in by the hundreds of thousands to the the Baldwin Bridge in Old Saybrook and Old Lyme, and every year before they head south they all gather at dusk, and then go into the reeds in one huge funnel at the exact same moment. So crowds will gather at dusk to watch this murmuration, and it's just amazing.

"Well, everyone knows about the Thimble Islands..." – not being from Connecticut or having cruised extensively along its coast, I was in the dark! This group of small islands – an archipelago, technically – in Long Island Sound off of Stony Creek and the southeast corner of Branford bring boaters from miles around to see the 340+ homes and buildings tucked into 1400 acres of rock and sea (but mostly sea). Caryn shared more:

There's all these islands called the Thimble Islands – it's a summer community where people have built these island homes. The islands all have history; Jane Pauley from The Today Show and Doonesbury comic Gary Trudeau both have a houses there. There are all these inlets and little coves where you can anchor and swim or go to the dock to get something to eat. It's really fun to go by boat and hang out around there. 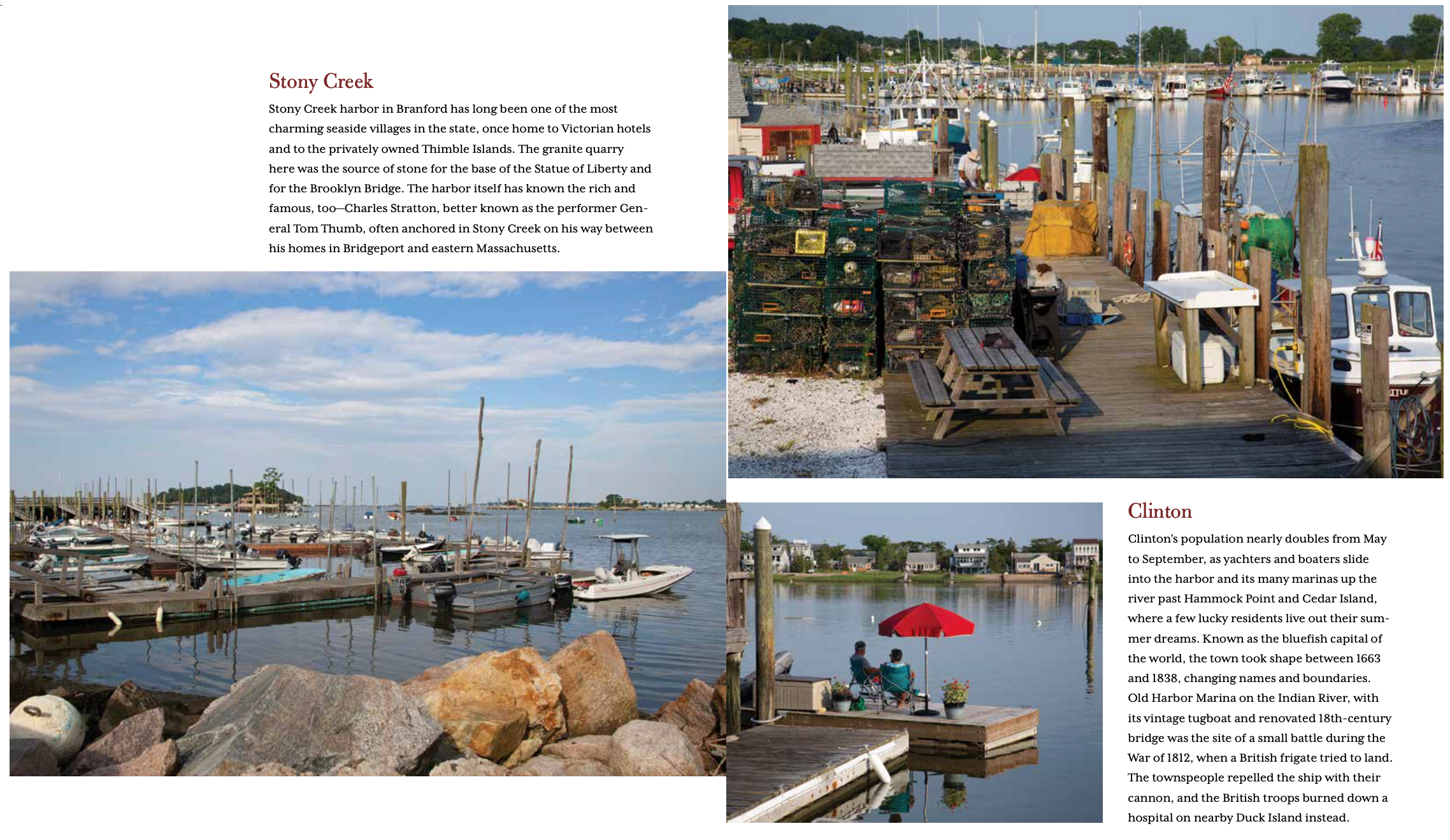 If you've cruised the CT coastline, you know there are seemingly endless beautiful harbors to explore. We asked Caryn to name three highlights off the top of her head – but of course more are featured in Connecticut Waters.

"Clinton Harbor is a lot of fun for boaters, and there are a couple of marinas to choose from. Cedar Island Marina has little hotdog stands, a pool, a playground for kids – and then next door is this bar restaurant called Aqua where you can eat on the deck and listen to music.

The key is that you can walk to all this – you leave your boat. There's a town beach and two lobster shacks which are in my book: Shanks and Lobster Landing. So there are restaurants in this little area, and then there's Cedar Island across the way, which you can anchor off of and use that beach. When you come into Clinton Harbor you have access to all of that stuff – it's all within a city block or less. I like that it's funky, it's a great vibe – it's still kind of the working man's village, a bit ramshackle and not all buttoned up. 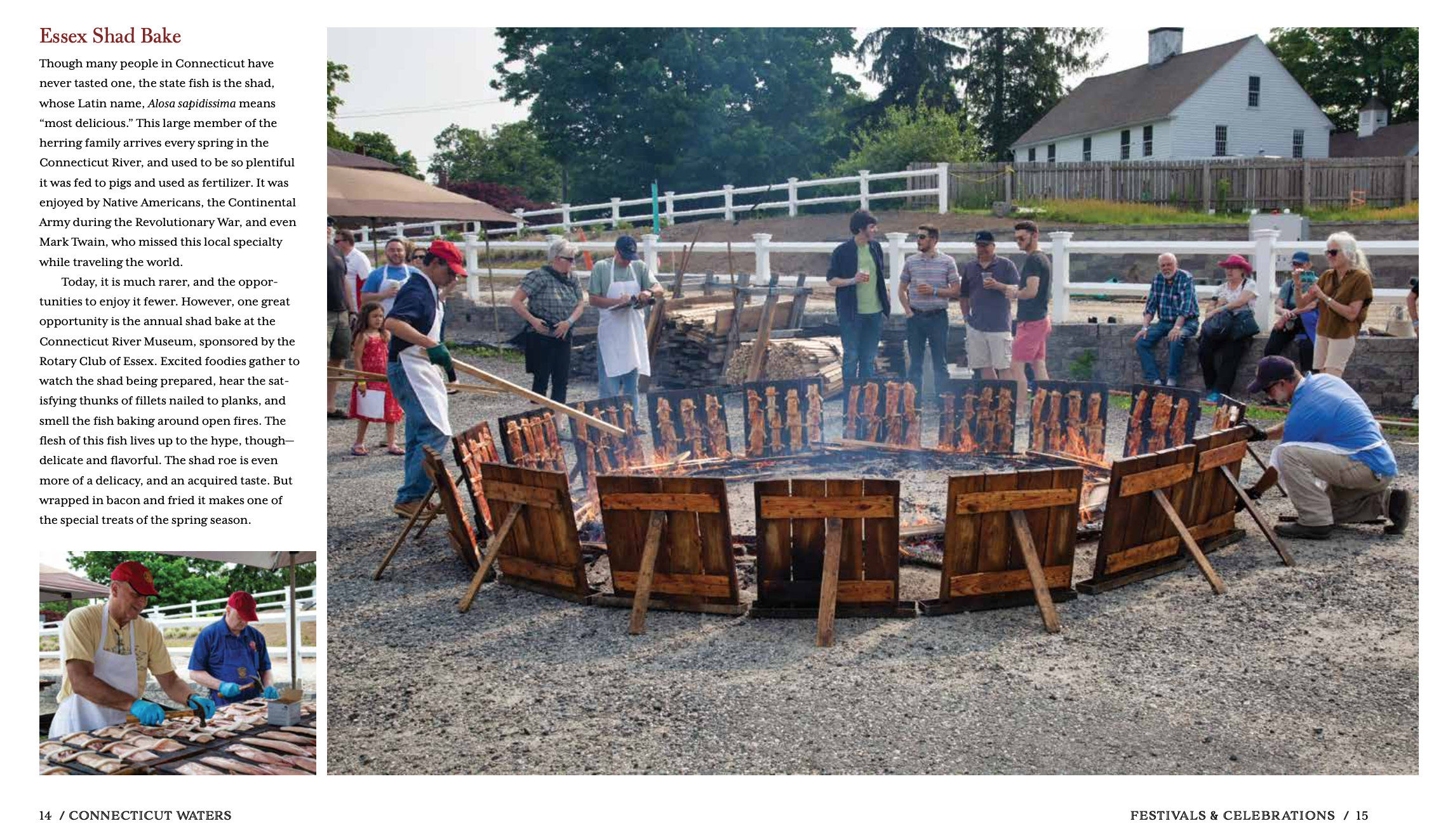 Located at the mouth of the Mystic River before you hit Mystic, Connecticut, Caryn describes Noank's old fishing village feel.

It's very small and it still retains this New England feel – it looks like what you'd expect to see in Maine. There are three restaurants on the water: Ford's Lobster, which is in the book – you can pull up there by boat and eat in the restaurant, but they'll also bring your order to your boat while you sit and eat, or you can get it to go. Abbot's you cannot get to by boat also serves lobster, and then there's Costello's, which you can pull up to and dock n' dine."

A Connecticut cruise isn't complete without a stop at Mystic Seaport. This Northeast institution draws thousands of visitors a year by land and by sea to its interactive exhibits, boat shows, and, quite simply, the boats themselves. Mystic Seaport feels like a combination of stepping back in time and visiting an art exhibit that took centuries to create. Caryn had a front-row vantage point of this harbor during her years working with the Mystic Seaport Museum, and as she rightly puts it, “Wooden boats are sculptural in their own way – they are works of art.”

I learned a lot about Connecticut's maritime history as well as its current shoreline vibe from this book, which I shared with Caryn – and she shared, "One of the frequent pieces of feedback I've gotten about the book is that people who've been area boaters their whole lives didn't know about a lot of the things that are featured! It's always a cool compliment."

We hope whether you're a life-long CT boater or someone just setting out, you learn something from this post or from her book.

Thank you so much to Caryn for sharing her extensive local knowledge with us! If you're planning next year's cruise or looking to commemorate this past boating season, pick up your copy at any of the local booksellers listed on Caryn's website, Bookshop.org, or Amazon.